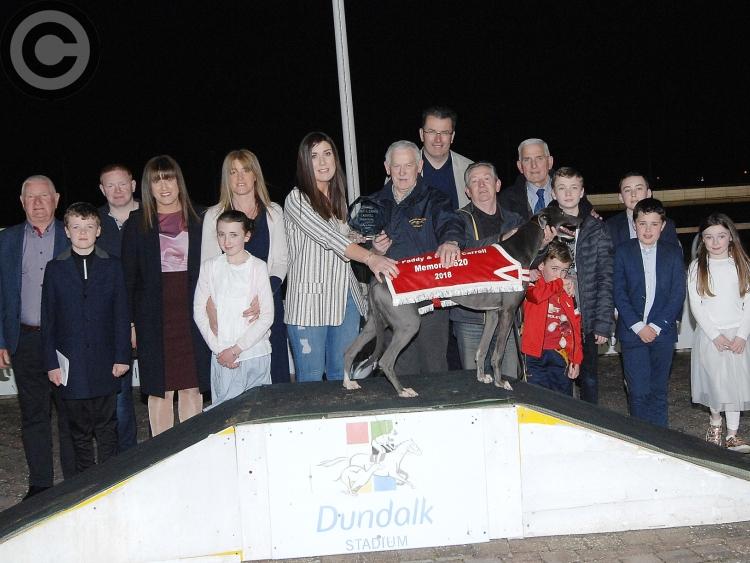 Eunan McBride's Smurfing Season, winner of the Paddy and Eamon Carroll Memorial 620 final at Dundalk Stadium, receiving the trophy from Fiona Connor with members of the Carroll family. (A. Kinahan)

A feature of this year's renewal of the Paddy & Eamon Carroll Memorial 620 at Dundalk Stadium was the number of tight finishes it produced.

A short-head and the same was the verdict in the second of the semi-finals, and going back to the opening round, Coconut Crusader had the minimum distance to spare over Boleys Fella and Corner Bar finished less than a length ahead of  Smurfing Season.

The trend was maintained in last Saturday night's €1,700-to-the-winner final, which, due to the presence of many members of the clubs with which the commemorated were involved, attracted the biggest crowd of the season so far to the Dowdallshill venue.

Once again the camera had to be called upon to separate the first two home, Smurfing Season and Boleys Fella. The picture it produced showed the former had prevailed over the luckless Boley, a short-head - what else? - dividing them.

By finishing no closer than fourth to Coconut Crusader in the semi-finals, beaten seven-and-a-half lengths, Smurfing Season had his interest in the competition ended. However, with Corner Bar - who would have been near the head of the market -   ruled out of the final due to an injury she picked up when finishing runner-up to Coconut Crusader in the penultimate round, the Donegal runner came in as a reserve.

And he made the very best of it, getting into contention at an early stage and holding a prominent position throughout. But it was Boley Fella who appeared to have the title in the bag as they turned into the home straight.

The Hillsborough-based runner was well away, just shading warm favourite, Coconut Crusader, at the end of the long run to the opening corner. But he moved off the first bend slightly, hampering Coconut Crusader, and, crucially, allowing the red-sheeted Smurfing Season up on the inside.

The three of them went down the back straight together, and were in line going to the final bend. Boleys Fella had a slight lead as they turned for home and was still in front going towards the line. But Smurfing Season wasn't finished with, and with one final lunge, Eunan McBride's runner, based in the picturesque Donegal village of Convoy, got to the front, edging out Boleys Fella, who, while failing to register a win in the three-round competition, had his biggest margin of defeat in two short-heads. The time recorded by the 4/1 winner was 34.25.

Brendan Mullan's Union Street Blues ran on to take third place, with Coconut Crusader fading to finish fourth. Neither Old Fort Miami or the Drogheda runner, Curly Chic, could get a blow after failing to get a clear run on the dash to the first bend.

Six local sports clubs were each allotted a finalist, and it was Dundalk Gaels, for whom Paddy Carroll played and was secretary for a number of years, who drew the winner. The presentation of a cheque for €200 to go towards charity was made to long-standing Gaels committee member, PJ Loughran.

The semi-finals of the Botanica International 525 also featured on Saturday night's card. Young Willie Mac showed a return to the form that had him running in top company last season, taking the opening qualifier in a career-best 28.67. The Kinloch Brae dog, running for bookmaker Barney O'Hare and Dromiskin-based trainer Ambrose Quinn, goes from two in the final, while the other semi winner, Santro Eclipse, will wear the five sheet.

Another winner on the night to wear a reserve sheet was Around The Rock, owned and trained by Blackrock's Colm Lawrence - and there was also a win for Dennis Farrelly's Deja Dancer, the local runner making it with just a short-head to spare over Catherine Kerr's Castleblayney representative, Steely Shadow.

Mid-Louth runners were to the fore in the early part of Friday night's card, Windtown Cass scoring for Dromiskin's David Dunne, and recent Sales purchase, No Mumbo Jumbo, taking a 400 for Kevin Kearney, Dunleer.

Later in the evening, Huntsmans Close ran a cracker for Pat Loftus, Dowdallshill, and Michael Tiernan from Drogheda. Chasing a second successive victory, the son of Godsend and Jo Jo flashed out of traps, got to the first bend in 7.14, and then ran a fine home straight to win by four-and-a-half lengths in 21.42.