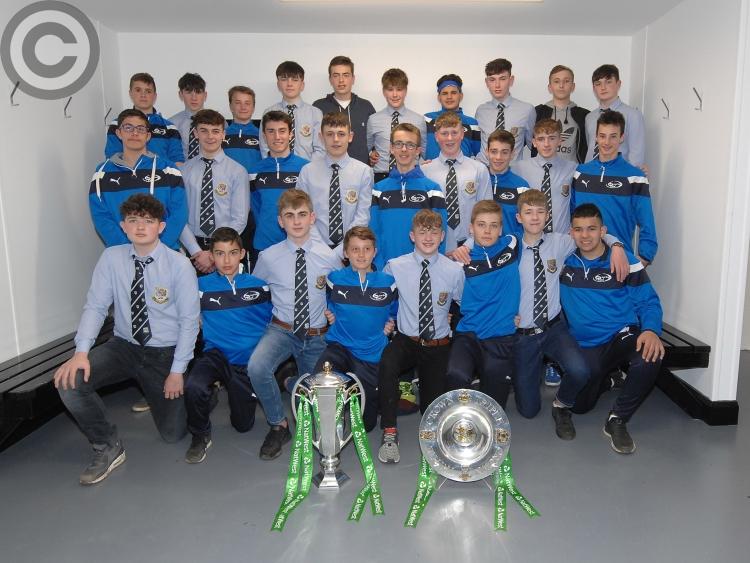 Dundalk RFC U16 and Dax RFC U16 (France) pictured with the Six Nations and Triple Crown trophies won by Ireland at Mill Road on Wednesday night. (Pic: Athur Kinahan)

Dundalk RFC U16s flew to Biarritz, France last Saturday week, along with their coaches and some of their parents, to begin a fabulous exchange with their St. Paul de Dax counterparts.

The lads were hosted by the French players’ families and had some great games of rugby in weather not too dissimilar to our own. They also tried their hand at paddle boarding and surfing and ten pin bowling while in Dax.

On Monday evening, they were invited to the Cadets Saint Paul Sport SPS Dax Rugby Club where there was a tremendous reception for the Irish visitors including food, speeches, presentations, dancing and a good old sing-song.

For the return flight back to Ireland on Tuesday, Dundalk was joined by their French counterparts and their coaches. Upon arrival, the French team was invited to a civic reception in the Town Hall and Chambers with John McGahon, Town Councillor, and Denis Cahalane. DRFC President.

They then headed to Dundalk Rugby Club for food and were given some quick hurling and football tuition in preparation for the Bride's vs Roche training exhibition match.

Great fun was had by one and all with many of the French lads joining in the match at some stage or other! Many thanks to Shane Rutledge, Deidre McDonnell, Aaron Hoey and Gerry Smith for showcasing hurling and Gaelic football to the French visitors.

The French lads were then hosted by our Irish families and given B&B before a busy day at Carlingford Adventure Centre joined by some of the DRFC TY students.

The final part of the trip was a rugby match between Dundalk and Dax on Wednesday evening. There was some fantastic rugby played by both teams before a reception was held in the clubhouse with some entertainment from Irish dancers, food, speeches, gifts given to the French coaches and, of course, a sing-song.

To cap the night off, the players were all treated to a viewing of the Six Nations and Triple Crown trophies. A fabulous experience for everyone involved.

Particular thanks must be given to Ultan Herr, whose son, Cian, is living in Dax with one of the families and has been playing rugby with Cadets St Paul Sports SPS team this season.

Adam Doyle, head coach of the U16 team, and Deirdre McDonnell must also be thanked for the huge effort given into making this trip the huge success it was and it could not have happened without them.