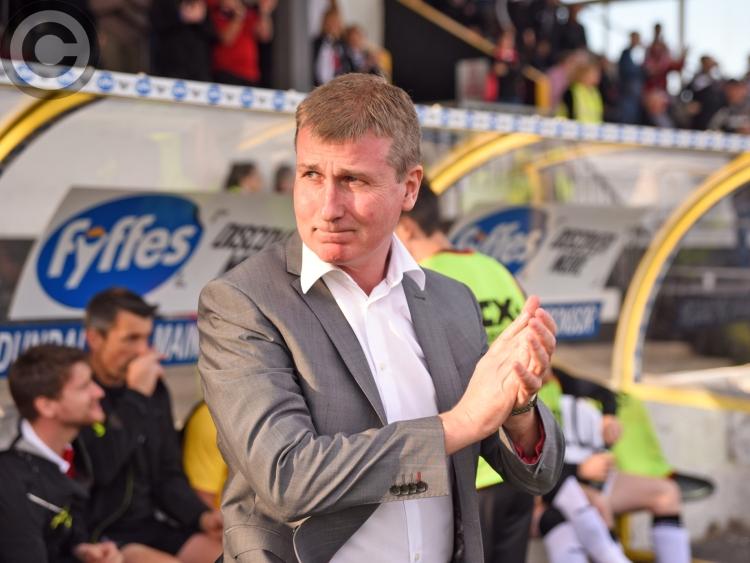 Ahead of back-to-back league fixtures at home to Dublin's 'big two', Bohemians and Shamrock Rovers, Stephen Kenny has said that he feels Oriel Park will be 'good' to his side this season.

Dundalk will look to build on a record of three successive home wins on the Carrick Road when Bohs visit on Good Friday night and the Lilywhites boss is hoping the supporters will come out in force having been given all sorts of thrills at the ground this season.

"I think Oriel Park could be good to us this year," Kenny told The Dundalk Democrat.

"I have that feeling and we want to maximise all our opportunities at home.

"The last three victories at home have been great occasions. Winning 8-0 against Limerick and people enjoyed it for that reason and then against Cork, which was a great win, and the last minute winner against Waterford after waves of attack in the second half. They have been great games and people will enjoy coming to watch those.

"We had a great travelling support in Sligo and we'll have a big crowd on Good Friday, really getting behind the team against Bohemians. We have two big Dublin clubs coming to Dundalk back-to-back and this is the first of them so it would be great to have that level of passion in the ground and to go and win the game," he added.

Dundalk 'keeper Gary Rogers enters the game looking to equal a club record of eight consecutive clean sheets, a statistic which Kenny refers to as "amazing". However, in recent seasons, matches between Dundalk and Bohs have tended to produce goals and highly entertaining contests.

"They're a hungry team, Bohemians. I saw them earlier in the season and I thought they would do well. Obviously, results went against them for a few weeks, but they had a good win last Friday (against Bray Wanderers).

"They have always given us a game. In 2015, for example, we won every game in the league all year (apart from at home to Bohs). They were the only team to beat us at Oriel Park.

"Our attacking play, we'll continue to work on it and try and have that level of creativity.

“It would be great to keep winning games at home," he said.

Doubts remain over the availability of Dean Jarvis (groin) and Dylan Connolly (back) for tonight's encounter, while Sam Byrne is more likely to be involved in the EA Sports Cup fixture with St. Patrick's Athletic at Richmond Park on Monday.