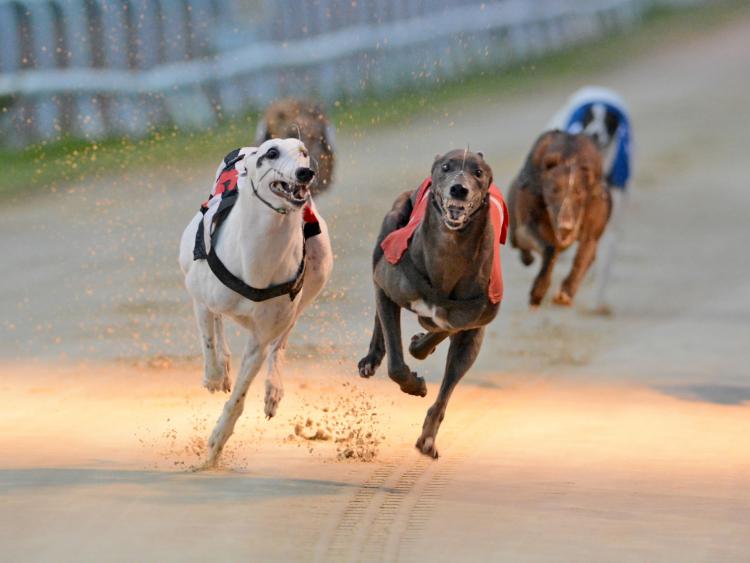 As the 'Fridays' continue to dominate at the local stadium, Seamus Casey struck a blow for local kennels, scoring a double on Saturday night's 10-race card.

A feature of racing over the past couple of years at Dowdallshill has been the huge number of winners amassed by Lifford's Paul Whyte, nearly all of them carrying the Friday prefix. He makes a long journey to and from the track, but it's all been made worthwhile. Rarely does he leave without a

On Saturday night Whyte chipped in with a treble, and while he was doing the business at the 'Hill a little over fifty miles up the road, another of the Whyte clan, Jason, was proudly standing on the Shelbourne Park podium, being presented with the prestigious and long-establish Easter Cup.

Jason's Colarhouse Gerry, trained by Owen McKenna, had been caught close to home in each of his preliminaries, twice by last year's Irish Derby winner, Good News, but here he saw the trip out magnificently, crediting his owner with the €25,000 first prize.

Nothing like that for Paul Whyte, but who's today one of his winners, Fridays Caramel, won't go on to annex an even bigger prize than Colarhouse Gerry. The home-bred bitch's victory came in a qualifier for the Con & Annie Kirby Memorial at Limerick, going ahead the weekend after next, and the purse here is a massive £80,000.

Fridays Adele and Fridays Rosaleen were the other Whyte winners – for a while it looked as if there might be a fourth winner, Fridays Skittles showing with a chance as the concluding 525 drew to a close.

The Whyte runner, however, was outpaced by Groveshill View, whose 29.40 completed the Casey double. Earlier in the night, Groveshill Ash set the ball rolling, the one-time Limerick tracker scoring over the 400.

Like many of the Casey runners, the two winners are owned in partnership by their trainer and Dowdallshill veteran, Arthur Boyle, who, while he doesn't attend the track, is kept right up to date with his runners' progress through a call from his colleague's mobile.

Another trusty local partnership, the one formed by Raymond Bellew and Mark Durnin, was also on the scoresheet, winning as 400 with newcomer, Boherdeel Jim, and could a weekend pass without a winner for Colm Farrelly's kennel?

In fact, Farrelly's long-time winning operation also got a double, the litter-comrades Bourbon Country and Pats Rocket both opening the career accounts.

Friday's night's Dowdallshill card was good for another duo, Pat Loftus and Michael Tiernan. They had Huntsmans Close running for them in a sprint, and the former Limerick tracker ran his best race since coming to these parts scoring easily over the sprint distance.

Also on the mark was Young Willie Mc, the Ambrose Quinn-trained Dromiskin black appreciating a drop in grade to register his eleventh career success.