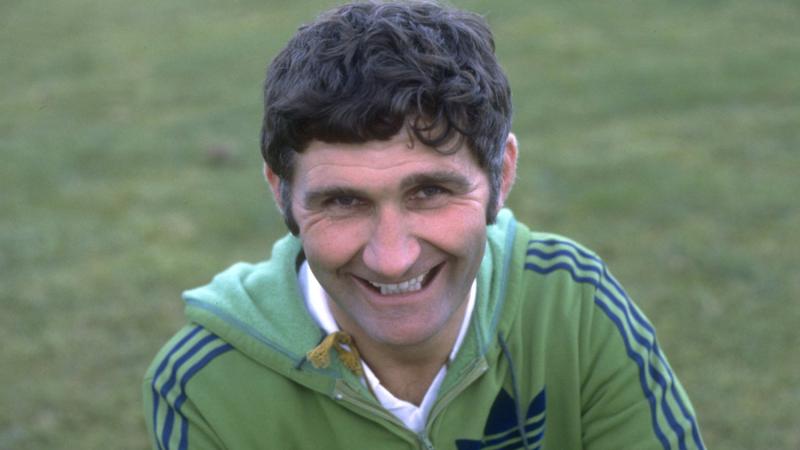 Mick O'Dwyer in his days as Kerry senior team trainer.

Among the many hundred, maybe thousands, of GAA programmes I've put aside over the years is one from a National Football League played at St. Brigid's Park in the autumn of 1965. Louth were out against Kerry and I was at full-back for the Reds. (Stop me if you think you've heard this one before.)

In those days selectors would name their team early in the week for publication in the daily 'papers on maybe Wednesday or Thursday. I was apprehensive but excited on reading the Kerry line-out - Donie O'Sullivan and Mick Morris in the full-back line, Mick O'Connell at midfield and one Mick O'Dwyer at full-forward. By then, the player I'd been matched with had won two of his four All-Irelands.

Kerry were in Galway's shadow at the time, beaten by the Tribesmen in that year's All-Ireland final and in 1964 as well. But they were still a formidable bunch, winning the Munster Championship with the usual regularity and the National League in '63.

Louth were going okay, doing enough good work in the league to earn the reputation of being a 'winter' team.

Me? I'd made a good start to the '65 Cardinal O'Donnell Cup with Gaels in my first year out of minor. We played Clan na Gael in a match at St. Brigid's Park – neither of us had a pitch of our own at the time – and I must have impressed Jack Treanor, who, as a county team selector, may have gone along to Dowdallshill to do some spotting, but because the referee didn't turn up, was inveigled into taking the whistle.

Togged out in his Sunday best, Jack kept good order while letting the game flow. He probably recommended me to his colleagues, because on the following Sunday I was in the Louth panel for the last of the 1963/'64 league matches, against Laois at Portarlington.

I didn't make the championship team that summer, but was in for the opening round league defeat of Wicklow at Ardee in the autumn. Kerry were next up, and for me this was to be some test, face to face with one of the game's greats.

Andy Kierans was in goals for us, Leslie Toal and Ja Clarke were in the half-back line, Jimmy Mulroy was at midfield with Tony Breen from the Sean McDermott's club, and among the forwards were Benny Gaughran, Seamus Mohan and Paul Judge.

Like most full-backs at the time, I had to take the kick-outs, and every time tried to steer the ball away from where Mick O'Connell was standing. It worked most times.

But I hadn't got the other Micko as my marker. The Waterville man was an absentee, and while he was probably injured or unavailable for some other reason, I often claimed afterwards that he had been told of this full-back who was oozing precocity, and didn't want to risk tarnishing his reputation.

It was another of these games that got away from Louth. We outscored the Kingdom by twelve scores to 9, but were beaten by a point, 2-7 to 0-12. Several good chances were missed, and I was helping with enquiries into one of the Kerry goals.

This game, from all of 53-years-ago – just imagine – came to mind while I watched that profile on O'Dwyer the week before last. I found the programme interesting, chuckling several times during it, in particular at the sight of the twenty or so youngsters chasing after a ball.

That reminded me of what used happen in the warm-up to practically all of the games I played in for club and county. We'd go on to the field with just the one football, and true to form the backs – along with their stand-ins - would congregate around the goals, while the rest, midfielders, forwards and other subs, would be out around the 50-yard line. The ball would be kicked in and out, and if you wanted a bit of the action you had to compete. Quite probably had we been asked to go through one of today's pre-match routines, our gasps for breath would drown out the noise of even the most vociferous spectators.

Micko complained about Kerry only having a masseur – a nun, it so happened to be – and a doctor in their back-up team. He doesn't know how privileged they were.

I don't ever remember a doctor being about the place in my thirteen years in the red jersey, with minors, under-21s and seniors, and if you got an injury which needed after-match treatment, you had to organise it yourself. Still, it was great to play for your county, and though having nothing to show for my many years of endeavour, I enjoyed it all, and was privileged to have played against many of those who came on the screen last Thursday week.

Having won four All-Irelands as a player, O'Dwyer masterminded eight more as manager, and in all he was involved in 22 finals, which is a record that will never be broken. His team's clashes with Dublin were epic – they had some weird and wonderful goals, and one particularly dreadful foul (on Kerry captain, Mickey Sullivan) that was made worse by the referee failing to punish it.

And there was Kerry's loss to Offaly in 1982, the roadblock to an historic five-in-a-row. Like the defeats by the great Down team in the 1960s, this one rankled with Micko. He called it as he saw it - Tommy Doyle got a 'nudge' leading to the deciding goal.

O'Dwyer never quite explained what took him to Wicklow on his last inter-county assignment. He had had some chance with Kildare, and nearly pulled it off, guiding the Lilies to a first All-Ireland final in 63 years; while Laois had prospects. Having never won a provincial title and only been once in the final, Wicklow presented a challenge greater than any of the others he had faced; failing it is not a blot on his copybook.

One other point from the programme: Did you notice how the teams in the 1960s finals stepped out in perfect unison in the parade? Left, right, left, right, head high, shoulders back and no slouching.

O'Dwyer didn't have to speak of his love of the game; taking charge of an under-14 team as he pushed towards his 80th birthday spoke volumes.