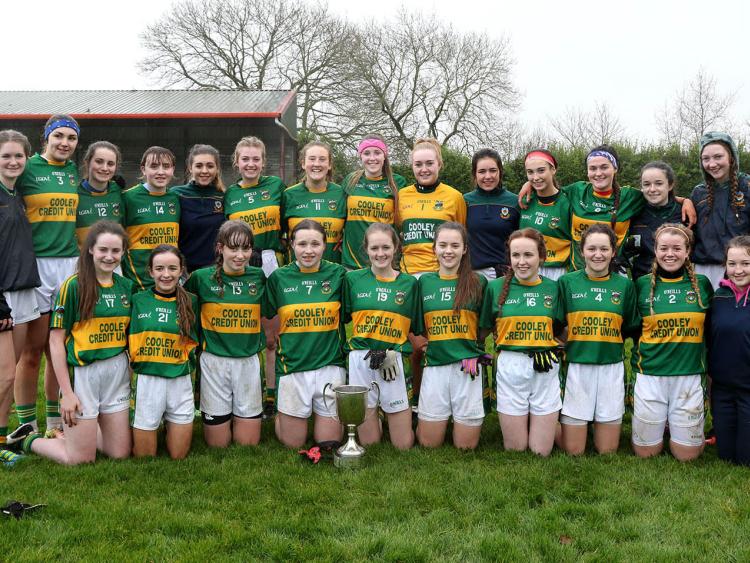 Cooley Kickhams Ladies U18's claimed a second Minor Championship title in a row on Sunday afternoon in Tullyallen, bringing to an end a wonderful year.

After coming out of a tight group that included Geraldines and St. Bride's/St. Mochta's, and then defeating St. Patrick's in the semi final, Cooley were marginal favourites going into the final against the combination team of Stabannon Parnells and St. Kevin's. But the form book was turned on its head when Stabannon/Kevins scored two early goals to surge into a six-point lead.

Stunned by the start, Cooley gradually got on top with a half-back line of Ciara Quinn, Claire Donnelly and Leah Kirwan and a midfield of Niamh Quigley and Aoife McDaid leading the charge. An improved forward performance, driven by Leanne Tuohy, Laura Traynor and Kathelyn Quinn led to four quick Cooley goals from the superb sharpshooters Niamh Rice (2), Ava O'Shaughnessy and Lauren Boyle. This gave Cooley a 4-5 to 2-5 half-time lead.

An early second-half goal for Cooley made it difficult for the combination team. The goalkeeper Sinead Rice and full-back line of Shauna Murphy, Lauren McGrath and Deborah Malone kept things exceptionally tight and strong contributions from substitutes Orlaigh McGuigan, Ella Murphy, Roisin McDaid, Hannah Kirwan and Kate Arnold enabled the peninsula side to dominated the remainder of the game and to eventually run out winners by a scoreline of 5-15 to 2-6.

This was a superb squad effort with Emily Ward, Eimear McParland, Lillian O'Reilly, Aine McDonald, Renee McGlynn and Georgea Hanlon also making valuable contributions throughout the year. They were expertly managed by Phelim and Martin Rice, supported by Aoife Traynor.

Niamh Quigley, Cooley captain, graciously accepted the trophy on behalf of the club with 16-year-old Niamh Rice winning the 'Player of the Match' award. This result is even more impressive considering the night before, Sinead Rice, Lauren McGrath, Laura Traynor, Ella Murphy, Emily Ward and Claire 'Tina Turner' Donnelly performed in the Cooley Lip Sync event to raise funds for their club along along with their manager, Martin 'YMCA' Rice! With all but four of the squad underage again next year the future is certainly rosy for this multi-talented group of girls.

The victory completed a great year for Cooley Kickham Ladies. In addition to the minor title the club also claimed the U16 Championship title in October. Success was not limited to the older age groups. The U14's and U12's both made it to the championship semi-final stage before losing to the eventual winners. Great work by the coaches at U10 and U8 grades ensured that the club has very healthy numbers coming through to maintain its position as a powerhouse of Louth Ladies football. The club's participation in the 'Gaelic for Girls' initiative was also a resounding success.

The success is driven by a dedicated team of volunteers, expertly guided by chairman Paul Hanlon and ably supported by a hard working committee. The challenge now for this group is to further develop these talented underage players to drive success at the senior level.