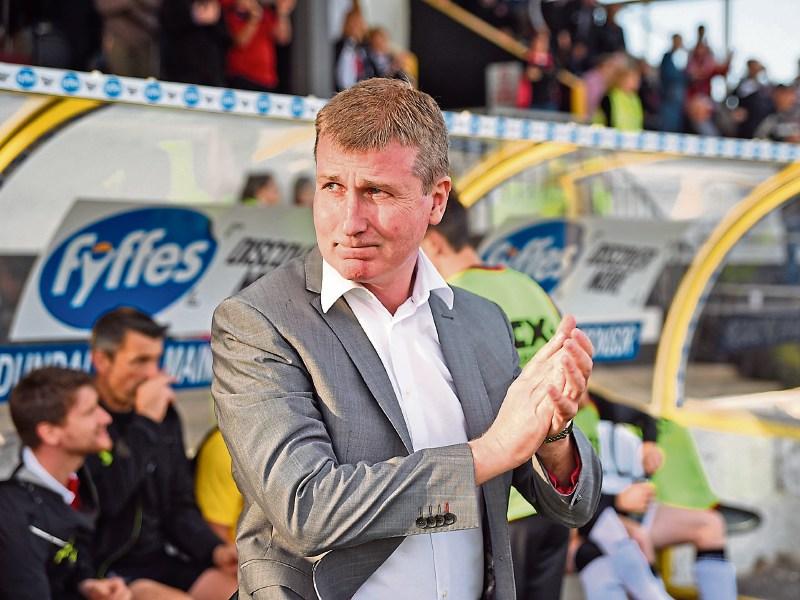 Stephen Kenny has called for his Dundalk players to pull off one of the greatest results in Irish football history when the Lilywhites meet Rosenborg for the second-leg of their Champions League qualifier in Trondheim tonight.

The Norwegians take an away goals lead into the match following last Wednesday’s 1-1 draw at Oriel Park, but Kenny has downplayed the significance of the goal and feels there is a belief among his troops ahead of the game.

“We’ll have to pull off one of the greatest results in Irish football history to win in Norway,” Kenny told the Dundalk Democrat.

“But, we’ll back ourselves because we’re still in the tie. There is no doubting that this will be a tougher game because Rosenborg will be stronger at home and we’re not disputing that, but we believe strongly in ourselves.

“I was delighted with the performance of the players last week. You always hope that your players perform on the big day and the Champions League is up a few levels, but I thought the players were magnificent. To a man, I think we were the better side overall and no one can say otherwise.

“But, we didn’t win the game and most people would now see Rosenborg as being in the ascendency with the away goal and we understand that. Although, I wouldn’t get fixated on the away goal either because it only becomes relevant if it’s 0-0 so from our point-of-view we have got to believe in ourselves.

“We scored a great goal last week and caused them plenty of problems particularly early on. Though, when you play a team ranked well above yourself and full of internationals; you’re not going to dominate for 90 minutes and it would be an unrealistic aspiration to think otherwise.

“Their equaliser changed everything in the first-leg because they were able to sit off and make it difficult for us to break them down.

“You would expect them to cause us more attacking problems in this game because they will have a 20,000, passionate home support behind them.

“That will add to their determination so we’ll have to up our game and put in an unbelievable performance. But, we have played away to Zenit and Warsaw so it won’t be any more difficult than those. The fact is that we just have to win the game,” added Kenny.

On the opposition, Kenny highlights midfielders Mike Jensen and Matthías Vilhjálmsson as being particularly dangerous.

“Tactically, you’d be expecting that they’ll come up with new ideas and ways of getting at us. We’ll be different ourselves though and nobody can ever expect two games to play out the same.

“We understand that they will have a different strategy for tomorrow night but I believe we can adapt to what they present.

“We know their central midfield players, Mike Jensen and Matthías Vilhjálmsson, get forward really well and attack from semi-wide areas. They often attack from up to 60 metres apart which is most irregular and because other teams keep their central midfield players central; that’s why Jensen and Vilhjálmsson score so many goals.

“We didn’t allow them to do that in the first-leg because we marked them in midfield. We knew if we were going to do that then we needed to make our attacking chances count and I thought we used the ball really well in getting forward. From that point of view, it was a really good display but we have to prove that we can repeat the display.

“This will be a difficult game and one that we’re really going to have to fight for because it’s going to take a special performance to get through.