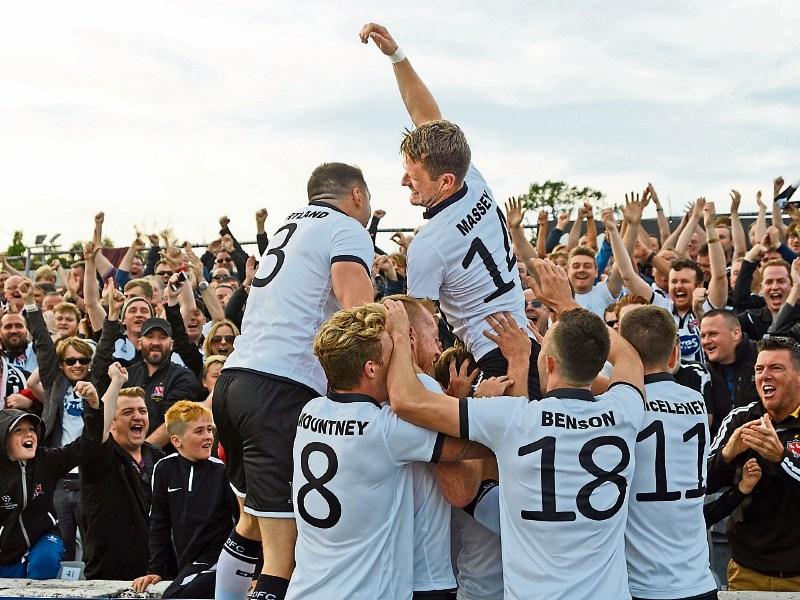 Dundalk have the quality to see off Rosenborg. Picture: Ciaran Culligan

Objective one was remaining in the tie, now it’s about crossing the finishing line first.

After last week’s excellent performance, Dundalk should no longer feel inferior to Rosenborg because this tie is firmly within their grasp.

Had The Lilywhites taken their chances at Oriel Park, this tie would already be over. That’s how well Dundalk played, but, perhaps more to the point, how limited the Norwegians looked.

On the other hand, Rosenborg showed their experience and character to eke out a draw from a game where they were otherwise hammered. That in itself is a portent of the quality held by Kare Ingebrigtsen’s charges.

Add to this their passionate home support and their extraordinary home record, having lost only three of their past 39 home games, and the reality of Dundalk’s task hits home. A score draw would give The Lilywhites extra-time at the very least, but should they aspire to achieve more tomorrow night, and win, it would mean doing something that they failed to manage in the midst of last season’s continental run. That is of course to secure a victory off Irish shores.

Dundalk must ensure they keep it tight across the opening exchanges. Conceding an early goal would hand Rosenborg the initiative and, as they showed in last week’s match, they’re a side who can shut-up shop very efficiently.

John Mountney’s inclusion on the right-wing for the first-leg proved a shrewd move on Stephen Kenny’s behalf, as not only did the Bohola man snuff out Rosenborg’s threat down the left-hand side, in tandem with Seán Gannon, but his never-ending reserves of energy offered opposing full-back Jorgen Skjelvik endless problems.

However, the most uncertain of their lot is Anders Hansen, their ‘keeper. His shot-stopping and distribution apart, Hansen looked flaky in the extreme at Oriel Park as The Lilywhites reined the ball down on top of him before half-time. With their obvious height advantage, one imagines that Rosenborg should be capable of providing their custodian more protection. Though, they did anything but at Oriel Park which offers yet another positive footnote for Dundalk to build upon.

Offensively the opposition lack pace with Nicklas Bendtner their focal point. The Dane was far from vintage in his display six-days ago, but his link-up with midfield runners like captain Mike Jensen and Matthias Vihjalmsson was a feature which Dundalk struggled to contain.

Granted Robbie Benson put in a serious shift in denying him space, Jensenstill looked their most influential player. Much of their play is either orchestrated by or flows through the midfielder hence Dundalk must be vigilant of his threat tomorrow night.

With Mountney and Duffy, who was sterling in last week’s game, likely to keep their places on the flanks and McEleney as the chief-supporter to David McMillan, you would imagine that Kenny will once again pair Chris Shields and Benson in midfield.

The duo carried out their man-marking duties on Vihjalmsson and Jensen to a tee in the first-leg and, despite Stephen O’Donnell being placed in contention by his manager, you would suppose that they will be handed a similar task this time around.

Gary Rogers will almost certainly start in goal with Gannon, Brian Gartland – who could again skipper the side – and Dane Massey, who put in his best display for the club in the prior game, to make up three-quarters of the back four. The only outstanding position relates to who Kenny opts for as Gartland’s partner at centre-back. Prior to hobbling off with a hamstring injury, Niclas Vemmelund looked far from his composed self during last week’s encounter having uncharacteristically given the ball away on several occasions, particularly during the first-half.

Paddy Barrett came in as his replacement and fitted seamlessly in. Hence, you would expect the Waterford man to slot into defence should Vemmelund fail to recover in time.

Tactically Dundalk will have fresh obstacles to overcome with Rosenborg sure to pose a stiffer test seven-days on, however, you get the impression that the first-leg has inspired a belief in The Lilywhites that they’re at least on a par with the Scandinavian juggernaut

Rosenborg have conceded in each of their last 13 European encounters so it would come as a surprise if Dundalk didn’t manage to score at least once at the Lerkendal Stadion tomorrow night. It is sure to take another monumental effort, but the champions of Ireland have the ability and temperament to overcome Rosenborg and their passionate following.