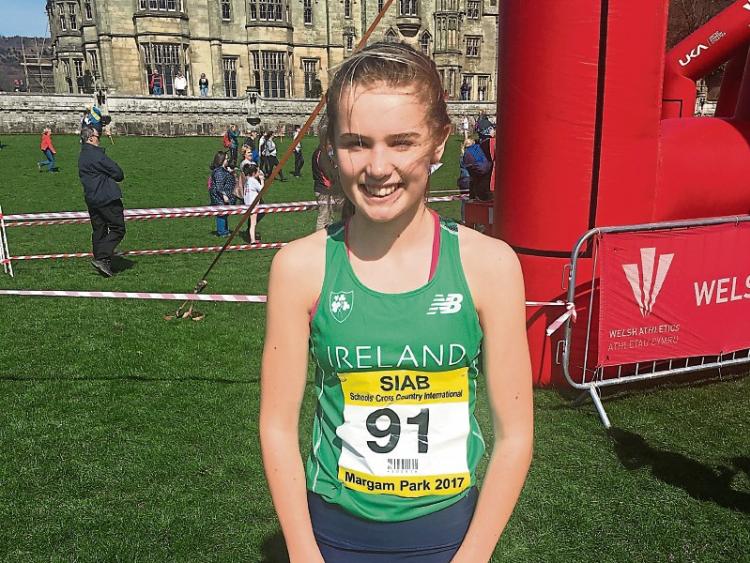 While normally preparing for the indoor track season Neasa competed for St Vincent’s school in the North Leinster U15 XC Championships in Mid February and had an easy win over the 2km course in ALSAA near Dublin Airport. That qualified her for the Leinster Schools XC championships held in Santry Park.

It was a titanic battle between Neasa and her good friend Aine Kirwin from Thomastown in Kilkenny with Aine just pipping her on the line. It was only at this stage that Neasa realised that a top 8 finish at the National Schools XC Championships in Mallusk, Co Antrim would qualify her to represent Ireland at the Schools International XC In Port Talbot, Wales.

The distance was 2.55k in mucky but flat conditions and while never expecting to be in the top 3 but hoping to be in the top 8, Neasa found herself in the early stages running on her own in 3rd place. It was a long lonely and pain run but so worthwhile with the pictures showing her trademark smile crossing the line knowing that she was going to be on that plane to Wales. Her muck spikes were ready for the bin but now they would have to be worn one more time!

The Irish team all met on Friday 24 March at Dublin Airport with most of the U15 girls team all knowing each other very well from years of racing against each other. Many parents also travelled and Neasa’s band of followers included her Dad, her 9 year old sister Aibhe and her lifelong fan Grandad Vincie!

Saturday was a beautiful day for racing and the course was a hilly but fantastic XC course. The only blip being that the organisers had changed the distance from 3.25k to 4.1k. Not used to running such a distance was definitely to the detriment of the Irish girls but it also showed them how strong the international competition is.

Scotland won the race with England taking 2nd, 3rd and 4th. Aimee Hayde was first of the Irish home in a brilliant 5th. Neasa ran a very creditable 21st and 4th Irish girl home but looking at all 8 Irish girls lying exhausted on the ground after the race showed how much effort they had put it. Half an hour later though all 8 were seeing laughing and enjoying the atmosphere with an ice cream in their mouths!

The icing on the cake for Ireland was the brilliant win by Bandon’s Darragh McElhinney in the U17 Boys 6.3k race. There was a great buzz as all the Irish boys and girls screamed encouragement at him throughout the race and even more so on the rostrum. It showed them that Ireland are capable of competing with the best.

It was a memorable weekend and in the words of Neasa ‘I loved every minute of it except for the race’! Hopefully there will be more to come.

Neasa’s focus now moves to the outdoor track season where she will race both schools and club competitions for St Vincent’s and Blackrock. St Vincent’s have a very strong track and field team with the likes of National champions Kate O’Connor and patience Jumbo Gula. Neasa is hoping to help St Vincent’s remain as one of the top athletics schools in Ireland in 2017.