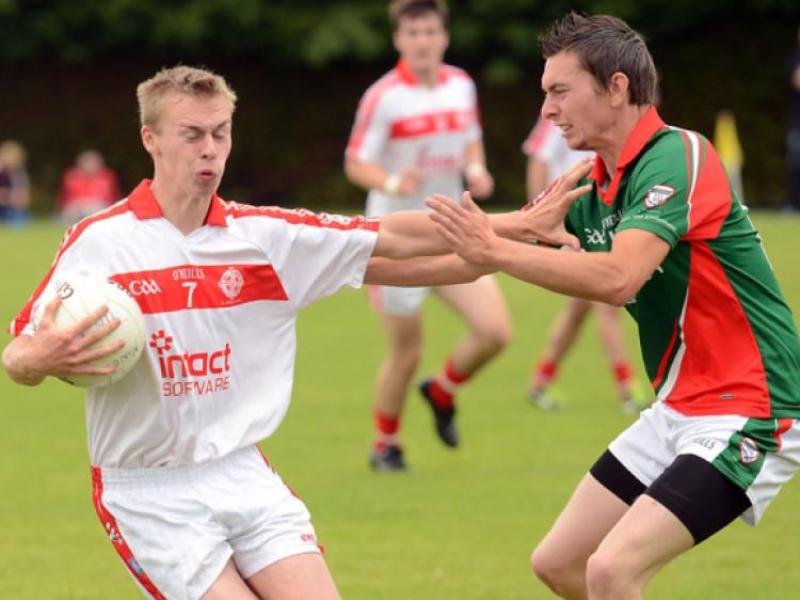 St. Brides opened the all-county league season with a two-point victory over Naomh Máirtín in Monasterboice on Tuesday night.

The Knockbridge men capitalised on their opening-half wind-advantage to build-up an early lead, which reached 10-points at one stage. And while the hosts battled back into contention and drew level from the penalty spot with a third of the second-half still to play, the visitors finished strong backboned by many of those who tasted minor championship success in 2011.

St. Brides started like a whirlwind with midfielder James Costelloe and inside duo Cathal McKenna and Aaron Hoey finding the net, in giving the Reds what looked like an unassailable cushion so early on.

However, Naomh Máirtín largely stuck with them in the point-scoring stakes and when Eamonn McQuillan rattled a spectacular volley to the bottom corner of Pearse Murphy’s net, following a decent passage of play, the Jocks went into the interval trailing 3-7 to 1-6.

And that goal appeared to bring the home team to life as on the resumption of play they tagged on five-points, taking it back to a one-score game, before substitute Greg Fahey converted a 50th minute penalty to tie affairs for the first and only time.

The Brides finished stronger though with Aaron Devin, Michael McKenna and Costelloe’s third point of the night cancelling out Mark McCullough’s solitary offering at the other end, with the visitors eventually running out two-point victors.