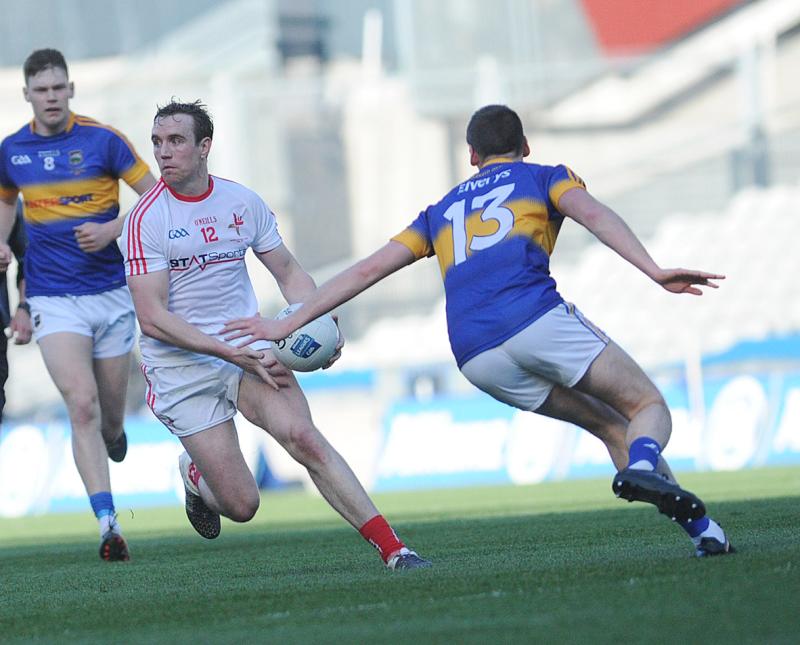 Louth forward Bevan Duffy lamented his side’s failure to build on a promising start in their nine-point defeat to Tipperary on Saturday evening, WRITES DAN BANNON.

Duffy, who has become a regular in the team this campaign, felt that his team needed a good start but was ultimately left disappointed by the way they defended that early advantage.

“We targeted a good start,” the St. Fechins man said.

“We got the good start and then the last ten minutes (of the first-half) we went from four-points up to four-points down in what felt like a blink of an eye.

“We tried to re-gather ourselves in the second-half and we did get back into it but then the goals definitely were the difference, they killed us in the end and we just couldn't recover.

"We tried to open it up a bit towards the end and chase the game and again that caused us goals. It’s a disappointing day all round. It was definitely a game we felt we could win, but it wasn't to be.”

The second Tipperary goal came after Duffy has been dispossessed close to his own goal and he feels that he could have done better.

“I should have held on to the ball,” Duffy insisted.

“I made the block and I don’t know if it was a free for me coming out. They’re usually the kind ones you get (a free for) because of the where the play is and what’s after happening.

“But, we haven't been conceding goals all year and in two games, the Armagh game and the final, we've conceded six.

“We only conceded one in all the other games combined so that’s disappointing.

“We were in the ascendancy and we said “no goals.’ However, the pitch is so quick and open and probably does lend itself to those kind of goals (on the breakaway), but if we had put away a few of our goal chances early in the first-half, which we definitely created, it would have been a different ball game,” he added.

Despite playing an integral role in their strong league campaign, Duffy admits that this defeat takes some of the gloss of what was an excellent run of results which culminated in promotion and their Croke Park date.

“The result kind of takes the gloss off what’s been a marvellous league campaign for us,” Duffy admitted.

“We topped the league and we were the best team in the league when you look at the league standings. But, because it's here in Croke Park both teams obviously want to win, they want to walk up the steps and lift silverware. We had the pleasure of doing it last year.

“(However) I'm excited, we are moving well and the pitches are going to firm up, and we’re not going to be in Drogheda again, luckily enough.

"We got Parnell Park for Wicklow, beat them and we have Meath there again.

“We are going to have a down week this week but we'll regroup. It won't be hard to get going again because we all know the championship is around the corner and we all know what we want to get out of that.

“You have to look at the bigger picture,” he added.