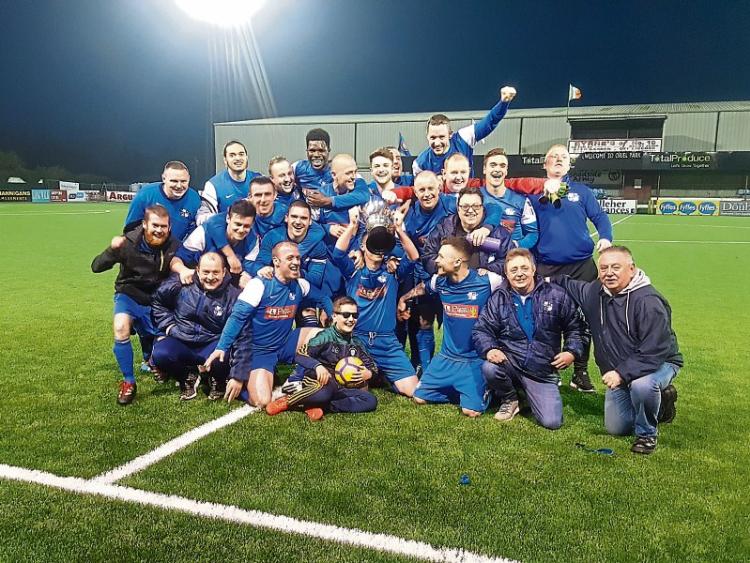 After a break of four years Muirhevnamor recaptured the T J Moore Cup, the blue riband of the Dundalk Winter League in a game that will go down as one of the best in it's thirty four year history.

From the outset both showed their intentions and set a pleasing standard of football with good off the ball play and crisp passing. Stephen Woods for Muirhevnamor had the first chance but his effort was blocked with desperate lunge from Stephen Mc Guinness. Further chances were cancelled as Wanderers rearguard was tested time and again but stood firm.

Bay showed their prowess with good counter-attacking play and had the Blues chasing shadows at times. Damian McCrink, in the Bay goals, was excellent and from a corner got his hand to a difficult ball coming off the crossbar. However, through all the endeavour the first half ended scoreless, something that hasn't been seen for a long time in the history of the tournament. But all that changed in the opening minutes of the second period when Mickey O'Kane put Muirhevnamor in front, finishing off a good move. But Wanderers did not buckle and gradually upped their game. This was rewarded with an equalliser by Joe Woods from an impossible angle which seemed to take an age to go in off the far post. The intensity grew from both sides and football of the highest quality pleased the crowd. Muirhevnamor took the lead again through O'Kane as he found himself in posession twenty yards out and looking for options saw none and had a go. The well-placed shot flew in to the top right corner leavin McCrink helpless. But back came Bay again and had their period of prolonged pressure in which they tested Thomas Mulvey time and again.

They perhaps should have equallised when Michael Woods headed just over with the goal at his mercy. McCrink was out bravely again to thwart Mickey Gray and went down low to stop from Webb. But Muirhevnnamor got their third with a great strike from Stephen Woods and try as they may Wanderers did not have the luck go with them to cunjure another comeback. The cup was presented by Seamus Moore, father of T J, and he thanked the League for the ongoing tribute to the lad that gave the town the Dundalk Winter League.