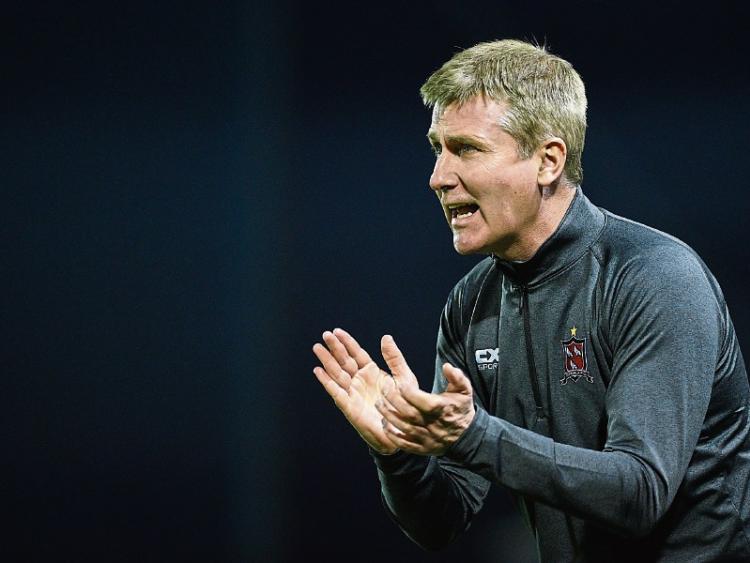 Dundalk manager Stephen Kenny believes that Bray will not just pose a serious challenge when the sides meet at Oriel Park on Friday night, but that the Wicklow side will be contenders at the top end of the league table as the season progresses.

Speaking after the Lilywhites’ sixth win of the season in Ballybofey on Friday night, Kenny said: “It’s a big game for us as Bray will look to challenge this year.

“They are only three points behind us and they’ll be looking to go second themselves with a win.

“They won in Derry recently so they’re going well and they’re a very experienced team.

“There’s been a lot of investment in their team so we’ll get a really tough game on Friday night.”

Kenny is waiting to see if Patrick McEleney and Paddy Barrett will win their fitness races’, with both having sat out the 2-0 win over Finn Harps with respective groin and thigh complaints.

“He tweaked it in the game against Cork and came on last week and re-tweaked it so we’ll have to see about him before next week.”

Dundalk were able to welcome captain Stephen O’Donnell back into the fold having missed several weeks through injury while Seán Hoare was handed his full debut in the victory over Harps. Both are in contention for starts against Bray.

“Stephen (O’Donnell) only re-joined training on Tuesday and trained a bit on Thursday so he’s catching up on training after six-weeks out and Seán had a good game tonight.

“Those were the sort of leaders we were missing,” added Kenny.

The form of David McMillan since returning from a lengthy injury lay-off is another thing which is encouraging Kenny who feels his side have had “a good start” to the season.

“People don’t realise the tole last season took (on him). Going right to December and the unprecedented run of games was really against medical advice. It took its toll with him and Chris Shields being unavailable until the last two weeks.

“They had no pre-season at all, not even a friendly game, but David came up with two big goals and was very unlucky not to get three tonight. Apart from his goals, his all-round work was terrific as well.”

Dundalk host Harry Kenny’s Bray side looking to extend their unblemished record on their new home surface but, with the Seagulls on a three-game winning streak, the Lilywhites will have to be on their guard.