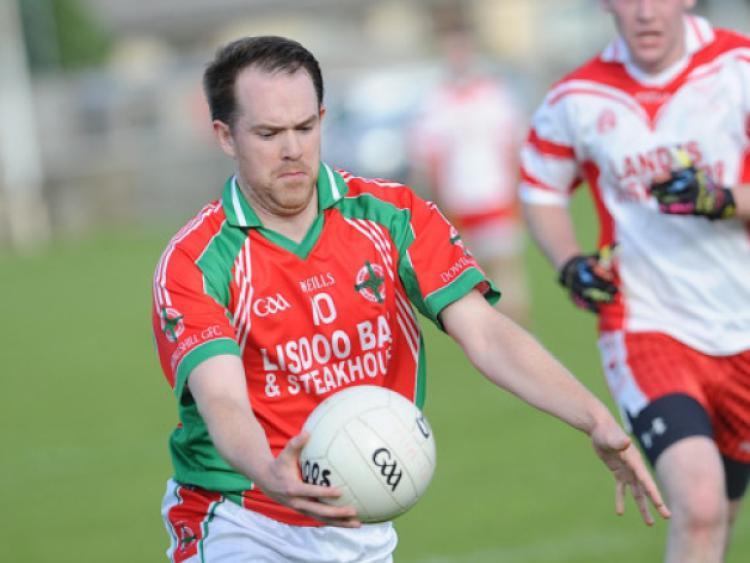 Four late points from St. Kevins paved the way for victory over mid-Louth rivals Stabannon Parnells in Phillipstown on Sunday.

Having fallen two behind with just under 10 minutes to play, the junior championship holders fought back to register the final four scores with Seanie Crosbie, Aidan Craven, Liam Boylan and Patrick Clarke tagging on crucial scores for Kit Henry’s side as they dumped Stabannon out at the quarter-final stage for the second year in succession.

The winners started the better with Lee Crosbie hitting the first two points followed by another from Paul Duff before Aonghus Giggins and Daniel Bannon got Parnells’ scoring underway.

However, a goal from Duff proved to be decisive as the sides continued to trade points heading into the interval. The score board read 1-6 to five-points in favour of the Kevins at half-time.

Stabannon emerged the stronger after the break and with Bannon in top form in front of goal they managed to edge themselves in front with just under ten minutes to play. Although, those four finishing points from the hosts was enough for them to qualify for the semi-finals.

A Liam Carthy hat-trick along with 2-7 from Barry O’Hare helped ease Roche into the last four of the Kevin Mullen Shield on Sunday morning against an inexperienced Naomh Máirtín outfit.

Having hit the first of his three goals minutes before the interval, Carthy banged home a brace after the break to add to Roche’s already handsome lead which saw them retire to half-time leading by 4-12 to three-points.

And the relentless siege of the Máirtín’s goal didn’t end there with 11 different players getting their names on the score sheet for Barry Cullen’s holders, including all six starting forwards while midfielders Dan O’Connell and Conor Carthy contributed a handsome tally of six-points.

The Faughart men were at it from the off and were already well ahead by the time Carl Courtney got the visitors off the mark with O’Hare and the evergreen Kevin O’Callaghan causing a lot of problems in attack.

Roche’s first goal from O’Hare effectively ended the contest inside the opening quarter and the former Louth u21 raised another green flag moments later from the penalty spot after O’Callaghan had been fouled.

O’Callaghan and Liam Carthy hit further goals prior to half-time before the eldest Carthy, Liam, hit the nice twice after the restart. Points from Emmet Hughes, Enda Murphy, O’Hare and Conor Carthy continued the Roche deluge while subs Mark Boyle and David O’Connell also got in on the act.

To their credit the Monasterboice second-string never gave up and ended with points from Joe McGrane and James Martin, although the result was never in doubt as both side’s move on to their league openers next weekend

Seven-points from play by Glyde full-forward Brian Duffy inspired his side to a comfortable 13-point victory over a weakened Lannléire side in Tallanstown on Sunday.

The big target man really hit his stride after half-time, pointing on six different occasions as Glyde extended their lead from four-points, 1-9 to 1-5, at half-time to eventually run out easy winners in a game were each of their starting forwards struck on target.

Glyde shot out of the traps with Conor McCullagh’s eighth minute goal giving them breathing space after a sweet build-up move, although in their first meaningful attack Dunleer hit back with Colin Murphy finding the net to cut the deficit to three-points midway through the opening-half.

However, further points coming into half-time from Alan Brennan and Conor Sheridan put the west-Louth men in the ascendency.

And after changing ends, Glyde didn’t let up and outscored the visitors by nine-points with Trevor O’Brien, Brennan and particularly Duffy running riot with the breeze at their backs.

Lannléire’s only score of the half came from midfielder Paul Callan in the closing minutes as a depleted Dunleer exited the Kevin Mullen Shield at the first knockout hurdle.

The concession of five goals proved Dowdallshill’s undoing, after their Subsidiary Competition hopes were ended with this loss on Sunday afternoon.

After being denied a couple of 3-pointers in the opening quarter, Mitchells got the rewards their efforts deserved when they found the back of the net on 25 and 29 minutes to go-in-ahead 2-3 to 0-3.

The ‘Hill started the second half with two of their first three scores to narrow the gap to five, but they were firmly on the back foot when Mitchells rattled-in four goals in a 9 minute spell to take command.

With ten minutes remaining, the ‘Hill found themselves trailed by 14 points, and it looked a lost cause.
However it was then that they started to up the ante, and boosted by a couple of Aidan Mc Cabe frees, they slotted-over six unanswered points in the closing stages during a dominant spell, to put a degree of respectability on the scoreline.

Next-up for Gary Corrigan's team, is their Division 3 League opener next Saturday night, at home to the Westerns.