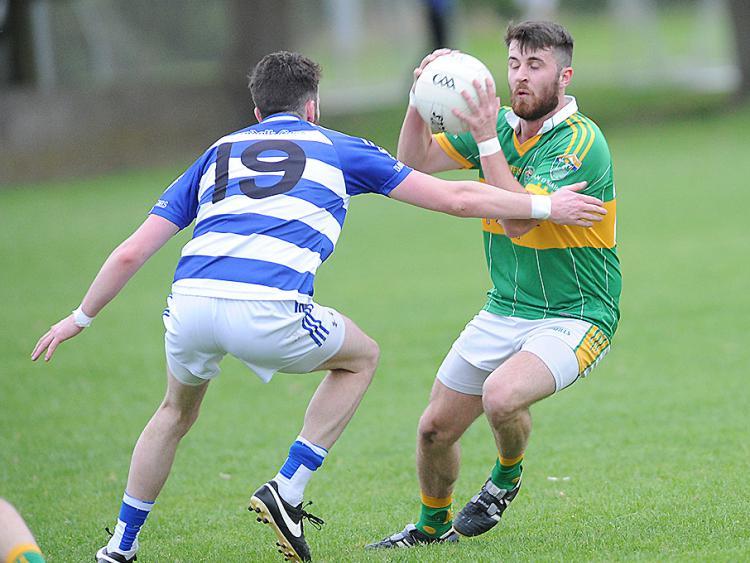 Having played each other already in the group stages, the Knockbridge side inflicted a second defeat on the O’Mahony’s and continued their 100% record in 2017 with a commanding first-half display which saw them lead 0-6 to 0-1 at the break.

The O’Mahonys’ only score in the opening 30 minutes came from centre-forward Conor Finnegan as they struggled to mount successful attacks into the strong breeze.

However, the Louth kingpins appeared stronger after the break with brothers Keith and Ben McLaughlin, alongside Finnegan and Johnny Connolly each scoring from play as the game grew tighter.

It was a nip and tuck affair in that second period with both sides playing opening football, up and down the field. Although, the Brides never relinquished their advantage at any stage with Ben McLaughlin missing a gilt-edged goal chance for the O’Mahony’s midway through the second-half having rounded a couple of defenders before firing narrowly wide.

They did get it back to a single digit towards full-time but with the Brides forwards on song, with each of them getting on the scoresheet, the winners will feel the win was the least they deserved.

Mattock Rangers knocked holders Ardee out of the Paddy Sheelan Cup on Sunday as David Reid rolled back the years to help the Collon men to victory.

Mattock had largely the upper hand in the opening-half and retired to the interval nursing a comfortable five-point lead, 0-7 to 0-2, with Reid and Louth u21 Aaron O’Brien starring in the Collon side’s attack.

Former county star Darren Clarke upped the ante after half-time while Dáire McConnon also performed well, and when substitute Paudy Clarke also got in on the scoring act the hosts threatened a late revival.
However, when Corcoran struck for the only major of the match along with further points from Reid the result was never in any doubt.

Paddy Keenan proved the match winner for St. Patrick’s as they accounted for the Clans on the Echo Road to book their place in the last four of the Paddy Sheelan Cup.

The former Louth captain hit eight of his side’s 14-points as Davy Nelson’s side put their purple patch in the early stages of the second-half to good use.

Having been level at half-time, 0-4 apiece, the Clans will reflect back upon missing three clear goal opportunities in the opening half with JJ Quigley coming closest having saw his dinked effort just rise over the bar.

The Clans started the brighter with Billy Smith opening the scoring and points from Quigley, Mark McGeown and Robbie Curran followed, while Keenan kept the Pats ticking over at the other end.

And the former All-Star continued his fine form on the restart as the Pats outscored the Clans 0-9 to two-points, including a two-minute burst at the start of the second-half which saw them raise three white flags consecutively.

Jason Woods also missed a goal chance having hit the side netting and the Lordship men also hit quite a few wides meaning they have still work to do ahead of their opening league game away to Naomh Máirtín next Saturday.