Louth Cuchulainn Cycling Team gearing up for An Rás 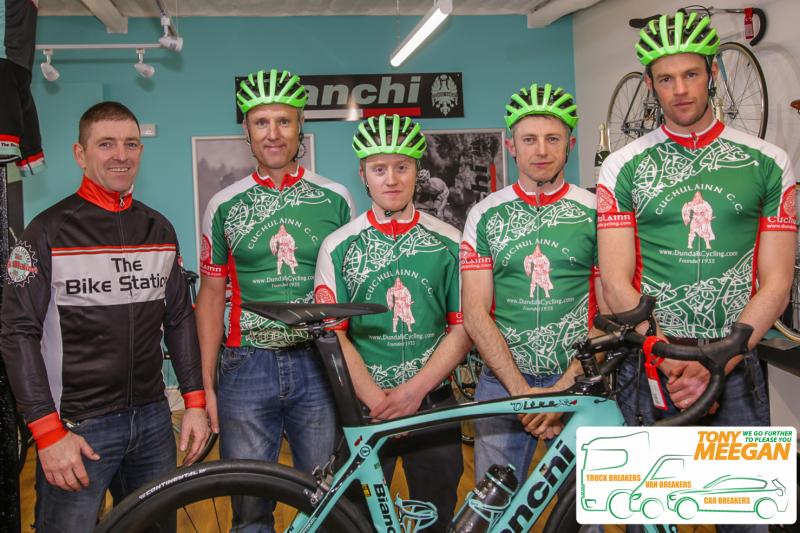 Friday last saw the launch of the Louth Cuchulainn Cycling Team for The An Post Rás, at The Bike Station in Dundalk. The team will compete in the professional bike racing starting from Dublin Castle on May 21st and finishing some 8 days and 12,000km later on May 28th in Skerries.

The 8 day event firstly heads to Longford, followed by Newport, before spending 4 days in Donegal. It is the North West county where the race will most likely be decided with testing roads and savage climbs, most notable the category 1 Glengesh Pass and the Gap of Mamore. Stage 5 in particular sees the riders tackle 185km from Buncrana to Dungloe with 3 categorised climbs en route.

The race leaves Donegal on stage 7 and makes the 167km journey to County Louth with a first ever stage finish in Ardee. This route will feature roads well known to the Louth team, in particular Ardee's Tómas McCabe who will be attempting his first Rás. The race finishes the next day with the traditional circuits in Skerries, with multiple ascents of the steep Black Hills.

The Louth team is composed of Alan Gray (Dundalk), Ray O`Shuaghnessey (Ravensdale), Liam Dolan (Dundalk) Tómas McCabe (Ardee) and Cootehill cyclist John Fitzpatrick. A race of this magnitude requires a huge financial input and the team has secured title sponsorship from Tony Meegan Salavage Ltd. Local businessman Meegan has always had an interest in local sports and was very keen to get involved with the Louth Cycling team.

The team was launched at The Bike Station where Tony Meegan and a number of other sponsors were in attendance. Ray Fedigan, owner of The Bike Station, will accompany the team for the 8 days to ensure that all equipment is working smoothly.