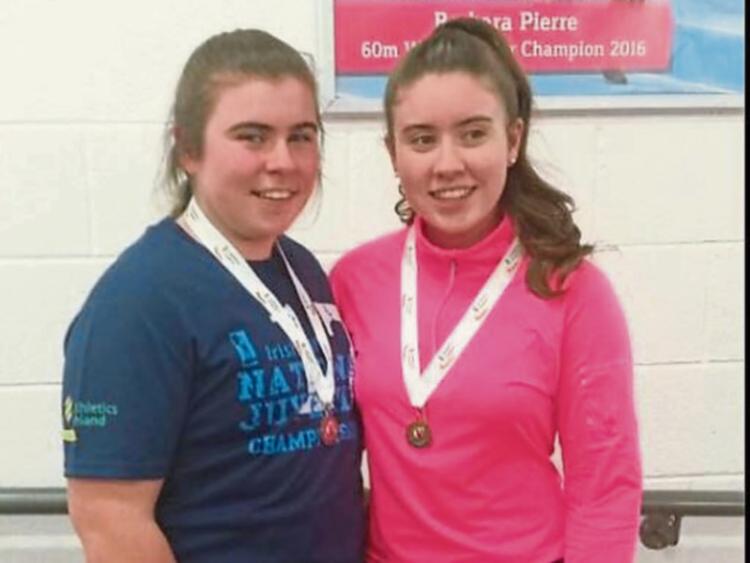 SHAUNA and Aoibhín McMahon took the plaudits for Blackrock AC at the National Indoor Championships held in Athlone IT last weekend as both girls managed to claim a place on the podium in their respective shot put competitions.

Well done to both girls. Elsewhere it was a mixed bag for the other Blackrock AC participants at the championships with the Girls U.17 4 x 200m relay missing out on a place in the final by one tenth of a second, Leinster silver medallist Sean Reilly crashing out early on in the boys U.12 high jump and Leinster bronze medallist Sarah Clarke coming up short in the Girls U.16 shot put competition. Nevertheless there was a lot to be gained from the experience of competing on the national stage and hopefully this will inspire the athletes involved to improved performances in the season ahead.

Meanwhile a group of our younger athletes headed to Carrickmacross on Sunday for the juvenile event hosted by Carrick Aces AC as the opener to their annual 5K road race.

Faith Scanlon was the first Blackrock AC athlete to compete on the day lining up in the Girls U8 60m. In a tough race she was just outside the medals coming home in 4th place however she can be very pleased with her efforts. Faith also took part in the Girls U8 200m battling hard over the longer distance to come home not too far behind the winner who happened to another be another Blackrock AC debutant, Grace McEvoy who stormed to a brilliant first place.

Definitely an athlete to watch out for in the season ahead.

Sam Jeytoo was next up to make his debut for Blackrock AC in the Boys U8 60m and did himself proud over this distance and the 200m, demonstrating a lovely running style which will serve him well as the season progresses.

The Girls U10 60m was the race that began a medal rush for Blackrock Athletes when Grace Reilly laid down a marker for the season to come by picking up a silver medal in a very competitive race.

Shortly afterwards she doubled her medal haul by proving her speed and endurance over 300m to land another silver.

The club were well represented in the Boys U10 division when Jack Greene, Sean McKenna and James Scanlon lined up in the 60m. Jack took medal honours for the club just edging Sean out on the line for bronze with James not too far behind. The lads were joined by Conor Ward for the 200m with Jack going one better to collect silver whilst Conor picked up a bronze after being pushed all the way by the two other lads. There will certainly be some ding dong battles between these four in the meetings to come over the summer.

Lauren Reilly, Rebecca Baldwin, Emmy Jeytoo and Jessica Scanlon were the clubs representatives in the Girls U12 events and it was Rebecca who produced the performances of the day with two convincing wins firstly over 80m and then a perfectly executed 500m.

Lauren was unlucky not to make the podium unfortunately finishing 4th in both races with Emmy and Jessica performing well also.

The final athlete to represent the club with flying colours was Alex Gormley who picked up bronze in the boys U14 80m, a fine achievement considering that he is a year younger than his competitors.

Another notable performance at the weekend was Neasa Reilly’s debut for Ireland in the SIAB international cross country meeting held in Wales. As usual she did not disappoint coming home as the fourth Irish athlete out of a team of eight, a notable achievement considering the very high standard of competition. All in all a very good weekend for the club with plenty more to come as the outdoor season progresses.