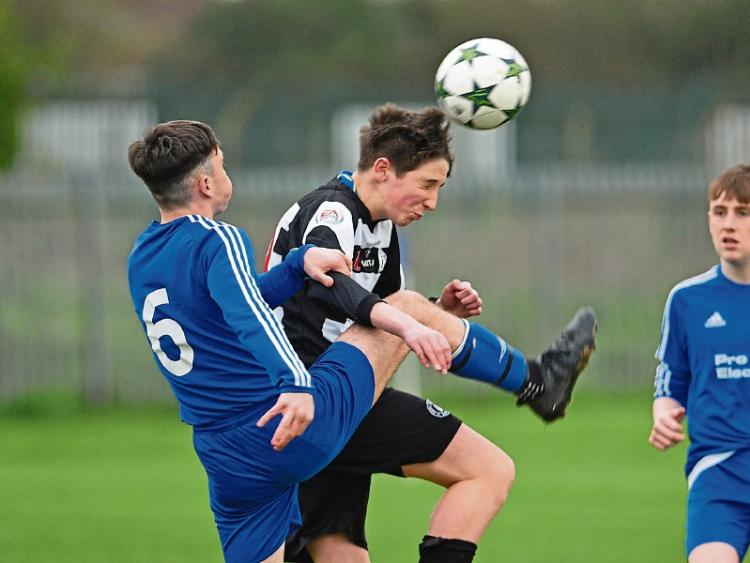 Glenmuir United recorded their fifth straight league win in a row to top the U16 Premier Division league table when they entertained Quay Celtic in Glenmuir Park on Thursday evening.

This was a competitive but entertaining game although the blues were deserved winners the under-strength Quay Celtic can be proud of their performance as they made their hosts battle for everything. David Ekperuoh had an early chance for Glenmuir but missed the target by inches but it was the visitors who showed more intent as they chased and harried from the opening whistle.

Terence Kelly and Michael Begley were on top in midfield and it was no surprise to see the Point Road outfit take a 14th minute lead when Kelly’s corner was slotted home by Joseph Mee. Quay looked to add to their lead and had a strong penalty appeal waved away by referee Colm McConville moments later when Isaac McGahon appeared to be bundled off the ball and the same player fired narrowly wide on 18 minutes after Kelly’s goal bound effort was blocked by Kian Newell. Goal scorer Joseph Mee then had a glorious opportunity to double his tally but Kyle Connor was alert to produce a fine save.

Glenmuir finally settled with the introduction of sub Patrick Nicholson and the sides were level on the half hour mark at 1-1 with a superb free kick by Luke Murray who swerved the ball around the wall into the far corner.

Glenmuir upped the tempo of their game after the break and could have had two goals in the opening five minutes but a snap-shot by JJ Nwabueze was superbly tipped on to the crossbar by Cillian Rice and a Caolan McCabe header was inches wide of the post. The lead soon came when Nicholson’s persistence set up Craig Lennon who steered the ball beyond the reach of Rice to make it 2-1.

The blues were now op top and it was soon 3-1 with the goal of the game when JJ Nwabueze’s superb long range effort flew into the roof of the Quay net. The setback didn’t fully damage the spirit of the Quay players and Mee almost reduced the deficit after latching on to Kelly’s clever pass before shrugging off the challenge of McGowan, but his weak shot was easily saved by Kyle Connor. Isaac McGahon also had an opportunity to score for Quay but fired wide and at the other end Craig Lennon should have increased Glenmuir’s lead after a magnificent Patrick Nicholson pass, but he fired high and wide of the target.