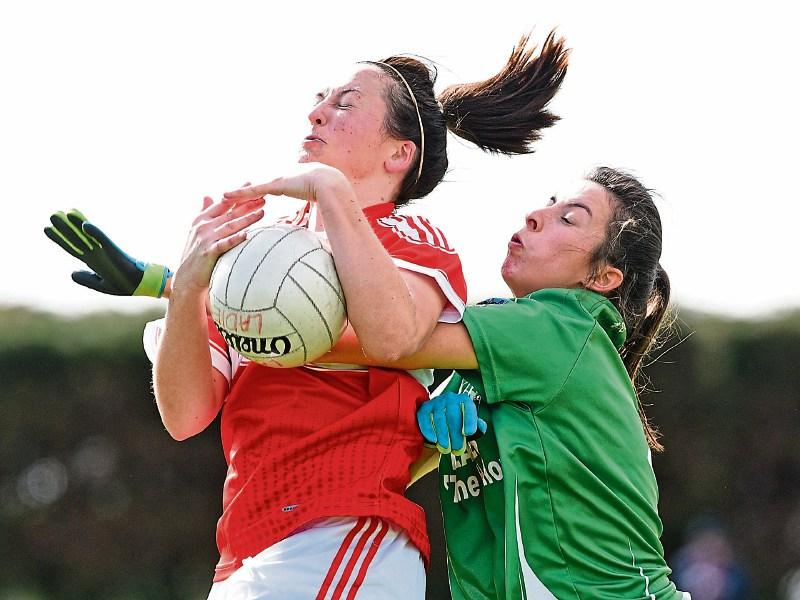 Trailing by 5-5 to 1-3 at the interval, it looked odds-on that Louth were heading to a big defeat against Fermanagh in Haggardstown on Sunday, but the Reds produced a much better second half display that resulted in them just failing to record the most unlikeliest of victories.

Louth went in this game knowing that only a win would see them qualify for the LIDL National League Division Four semi-final's.

Their prospects were'nt helped as this seasons leading scorer Paula Murray failed a late fitness test on a leg injury.

Despite this set back, the hosts started the better as Rebecca Carr fired over after only thirty five seconds

Just a minuter later Aimee McNally got behind the defence but was denied by a fine save by Fermanagh goalkeeper, Roisin Gleeson.

Fermanagh had to until the 8th minute for their first meaningful attack as Sharon Murphy hit the Louth woodwork with their first shot of the game.

The same player then mis hit her shot wide of the upright with just Louth goalkeeper Alannah Finn to beat.

Joanne Doonan opened the Erne side's account with a close-in free before Lisa Maguire and Louth’s Susan Byrne both hit wides at opposite ends of the pitch.

A superb Sinead Woods pass found Susan Byrne in space and the St Kevins player found a way past a number of defenders to shoot the ball past Gleeson. Rebecca Carr added a further point to put Louth 1–2 to 0–1 ahead mid way through the half

Fermanagh then took control of the half as they scored two goals in the space of a minute. Full forward Sharon Murphy getting both goals, first racing on to a fine pass by Joanne Doonan to hit the net, and from the resultant kick out Nuala McManus won possession and her pass put Murphy in the clear and she made no mistake firing to the Louth net to put the northern side ahead for the first time.

Louth were finding it difficult to get out of their own half at this stage and Doonan hit a free over the bar before Murphy tacked on another point.

Nuala McManus made it 3–3 to 1–2 with Fermanagh’s third goal, a brilliant left-footed shot across the helpless Finn.

Louth were in urgent need of a reply and they got it courtesy of an Aimee McNally point but Fermanagh then hit an unanswered 2–2 without reply to take a big lead into the break.

Doonan added another point, and they had a major let off when McNally saw her superb shot come back off the bar after a textbook catch by Ann Marie Murphy  and subsequent pass by Susan Byrne  had created the opening.

Play switched to the other end with Nuala McManus adding a point before Louth's luck was out again on the stroke of half-time when Dannielle McManus hit the net after a Murphy shot came back off the post and fell kindly into her path.

Louth managed by ex Dublin star John O’Leary sent Kate Flood into action at the start of the second half and the St Patrick’s star soon made her mark, turning onto her right foot and splitting the posts.

Fermanagh appeared to be back in control as they added three points without reply before Susan Byrne and Joanne Doonan exchanged goals at either end of the pitch.

Doonan’s goal extended Fermanagh’s lead to 13 points but a a spirited Louth dug deep and hit the next five scores of the afternoon to gave them renewed hope.

Flood’s quickfire brace, one a brilliant right-footed drive, the other a simple free, set the wheels in motion before Byrne made no mistake from the penalty spot to claim her fourth goal of the game.

Aoife Byrne then hit a captain’s point with a stunning left-footed effort and when Ann Marie Murphy managed to squeeze an effort inside Gleeson’s near post with four minutes left on the clock, the unlikeliest of comebacks was on the cards, 6–9 to 5–8.

Louth pushed hard and Flood sent a drive wide of the posts before the same player had the ball in the net, as she fisted a Carr centre past Gleeson but the effort was ruled out as the Pats player was in the square when it dropped her way.