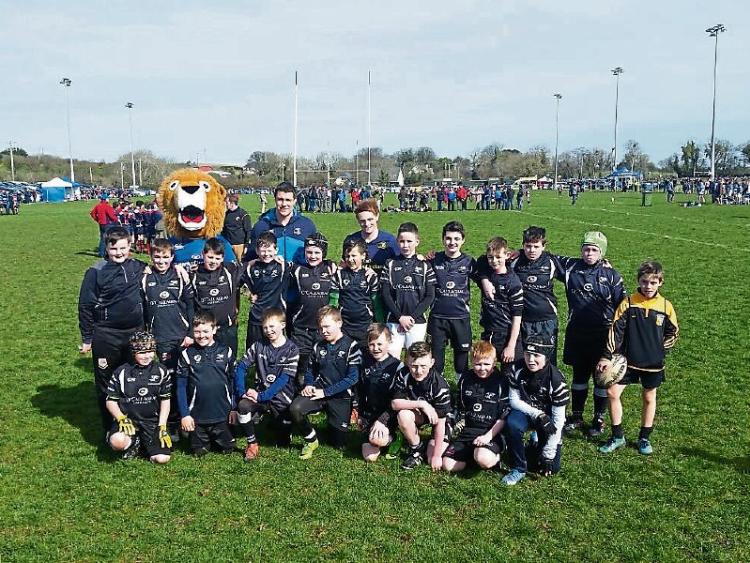 The Dundalk U12 Sharks headed to Balbriggan on a glorious Sunday morning to participate in the O'Daly Leinster blitz. Twenty four teams from around the province played three matches each in a very well organised and keenly contested tournament.

The Sharks' opponents were Ashbourne, Coolmine and Co. Carlow. Unfortunately for the lads, the squad suffered a few late withdrawls through absenteeism and injury but they still had twenty players making the journey.

First up for the lads was a local derby against Ashbourne. The boys started poorly and were a couple of early scores down. Steady scrummaging from Rory Wallace and Charlie Irwin led to a rock solid set-piece which allowed the backs gain a foothold in the match.

A wonderful rehearsed move between Liam O'Connor and Donal Lavery allowed the rampaging Cian McGuiness score under the posts.

The match then developed into a real ding dong affair with both sides matching each other score for score. Dundalk were further hampered when they lost their pack leader, Conor Whyte, with a hand injury but Calum Lambe and Max Valentine assumed the mantle and drove the team on. The highlight of the match for the Sharks was a superb individual try from the elusive Bobby McCaul which levelled the game with seconds left. Unluckily the lads conceded a heartbreaking try in added time to lose the tie by a single score.

Next up were the Dublin kingpins, Coolmine. Whereas other teams might have wallowed in self pity after losing such a tight encounter in the previous match, the lads roared into this match with renewed vigour and determination, epitomised by Oran Rafferty and Ryan Duffy. Euan McArdle carried the ball heroically and earned the hard yards which allowed Cian Jones and Joe Cassidy foray into enemy territory. Again this was another very tight match and with the scores level, Jake Kenny wonderfully anticipated the opposition's thought process and intercepted a pass to run the length of the pitch to put the Dundalk boys ahead with seconds remaining.

Coolmine piled the pressure on seeking the equalising score but Jack Mullen was having none of that as he produced Herculean strength to single handedly hold a driving maul up and thus ensured Dundalk's first win of the day.

The last match of the tournament pitted the Sharks against the very formidable Carlow side who had already two facile wins in the bank. More knocks and bumps left the Sharks' squad down to the bare bones but they produced a performance of commendable grit and bravery that left coaches and parents alike gleaming with pride.

Ewan Kelly and Enda Dooley led the charge with storming runs that forced the opposition back. DD Reilly brilliantly occupied the Carlow defence with some wonderful variety in his play whereas I'm sure some of the Carlow players will be having nightmares about Ryan Martin as he was constantly thwarting and disrupting their rucks with his fantastic aggression and belligerence.

But the player of the day for Dundalk was Fionn Connolly who gave an exhibition of scrum half play.