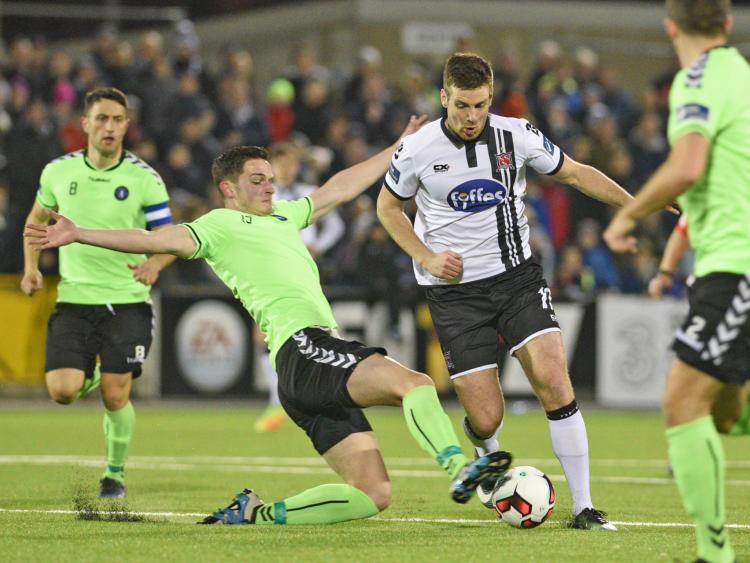 McEleney snookered Limerick with a sensational left-footed rocket at Oriel Park on Friday night, just six days after opening the floodgates in the 4-0 win against Sligo Rovers with a delightful right-footed free kick.

Former World Snooker champion O’Sullivan is noted for his ability to play with both hands and Perth feels that McEleney is just as adept when it comes to his feet.

“Patrick works hard on his left foot - more than anybody else - and when you put that work in, you get the benefit,” he said.

“It’s Ronnie O’Sullivan- . We worked on an inswinging delivery with his left foot yesterday and it was excellent. The work he’s putting in on the training ground is really benefitting him now.”

As well as his technique, McEleney has also worked hard on his fitness and Perth says the 24-year-old now has the right platform to showcase his undoubted ability on a weekly basis.

“This time last year he was picking up a couple of niggles and that was because he probably wasn’t the best professional in the world and didn’t have the right training methods.

“He has improved that end of it and has been a credit to himself. His physical condition now is as good as anybody in the group and it’s paying off on the pitch.

“It’s giving him a chance to express his talent,” he continued. “He is one of the most talented players, if not the best, I have ever worked with.

“He needed to get his physical condition right. It’s not that he was unfit, he needed to go up another level to match his talent.”

New boys Conor Clifford and Jamie McGrath also impressed against Limerick and Perth said he was happy with how they have integrated into the squad.

“We know what Conor is all about. He gives us huge energy in midfield and makes a lot of tackles. He is a stylish footballer and I think he will score goals as the games go on.

“Jamie has had his troubles in pre-season. The change in his training regime and shin splints mean it has taken him a while to get used to the pace of the way we do things around here but he’ll definitely get better as time goes on.”

A look at the players on the substitutes bench on Friday night suggests that Dundalk real strength in depth this year. It’s early days but Perth said that was a fair assessment.

“Whether it’s the best squad or not, we’ll answer that question at the end of the season but it certainly looks like it when you turn to the bench.

“Tonight we didn’t have Sean Hoare, Stephen O’Donnell or Shane Grimes and we weren’t struggling for substitutes. It certainly feels like the squad has improved.

“We’ve added a hunger and a freshness back into the group that may have drifted away at the end of last season in the players that weren’t the team. There’s a real positive vibe around the group,” he added.

And in an ominous warning to Dundalk’s title challengers, Perth insists the champions are still some way from hitting top gear.

“It’s early in the season,” he said. “We are still knitting together and I feel we can still improve.

“We’ve had two tough home games against Shamrock Rovers and Limerick but the away performance against Sligo was one of the best I’ve seen in my five years at the club. People say Sligo weren’t great but we were brilliant.

“There are flashes of brilliance and there’s still stuff we need to improve on. We probably still feel like we’re a week or two behind so, in that sense, it’s positive to pick up nine points from nine.”