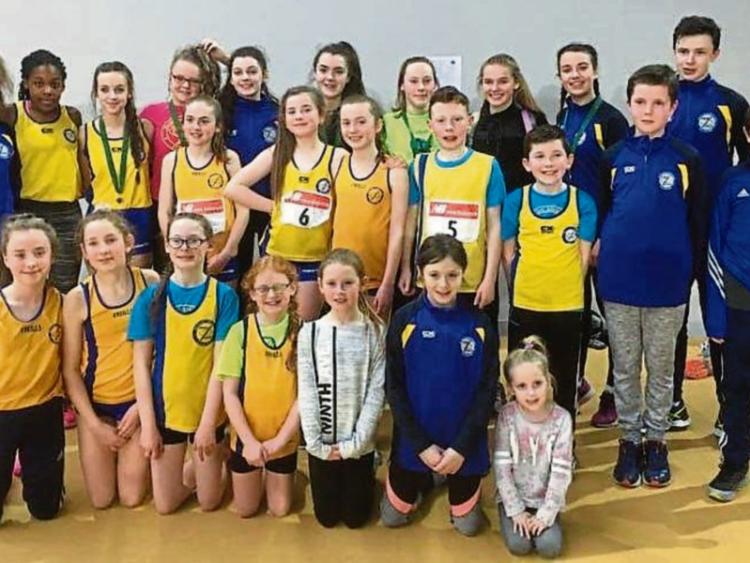 CLUB spirit and teamwork was the order of the day as athletes, coaches and parents from Blackrock AC made their way to the National Indoor Arena in Abbotstown for days 3 and 4 of the Leinster Indoor Championships recently.

The main order of business on day 3 was the inter-club relay competition although a number of individual field events were running in parallel for athletes competing in the U17-U19 age divisions.

Shauna McMahon, Girls U.18 Shot Put, and Oliver Gormley, Boys U17 High Jump, were the Blackrock representatives taking part in the individual events. Shauna, a seasoned campaigner at this level was unfortunate to fall just short of a podium place coming 4th whilst first timer Oliver gave a great account of himself also finishing 4th on his debut. Well done to both.

The day kicked off on the track with the girls U13 4 x 100m event. The Blackrock quartet was led off in storming fashion by Rebecca Baldwin who passed the baton to Ciara O’Brien who in turn passed to Lauren Reilly before Alex Bewley produced a blistering finish to see the team home in 4th place.

On another day, on another track this performance would have seen them secure a place in the final, unfortunately it wasn’t to be as they were just edged out for a fastest loser spot.

The same fate befell the Boys U13 quartet of Alex Gormley, Daniel Brogan, Ethan Doherty and Sean Reilly in their 4 x 100m. Led off by Alex, followed by Daniel, Ethan and then Sean the lads maintained a solid 4th place all the way around the track however their finishing time left them in 8th place overall with only six places up for grabs in the final. Nonetheless it was a good performance by a young team with both Sean and Ethan competing outside their own age group.

The Girls U15 team were up next with each athlete covering 200m this time round. Kirsten Doherty kicked things off, passing the baton to Eimear Fee who covered the second leg. Kendell Kamptchou dug deep in leg three before passing the baton to Neassa Reilly who demonstrated a decent turn of pace for an accomplished middle distance runner to see the team home in just under two minutes, a solid effort from all involved but slightly short of what was needed to progress.

With no boys U15 team taking part, the club had to wait a short while before the girls U17 team took to the track. Without doubt this is the clubs most experienced group consisting of Sarah Morgan, Sarah Clarke, Kellie Breen and Hannah Reilly. The blend of distance runners, Sarah Morgan and Kellie, linking up with sprint specialists Hannah and Sarah Clarke made for a competitive team and they didn’t disappoint.

In a very tight race right from the start Sarah Morgan led off superbly and passed the baton to Kellie Breen in second place.

Kellie ran solidly to maintain second position for her lap, passing the baton to Sarah Clarke who had a ding-dong battle with an athlete from Trim AC before handing over to Hannah for the anchor leg.

Unfortunately the change wasn’t as slick as what had gone before which cost the team vital time allowing Trim to sneak into second place.

Despite this Hannah produced her customary determined performance closing in on the Trim Athlete with every stride around the track to see the team home for bronze.

It was the turn of the even ages in the afternoon beginning with the Girls U12 4 x 100m. Katie Clarke started things off for Blackrock, handing over to Keelin Bewley who ran well before passing to Lauren Reilly who maintained her place and handed over to Rebecca Baldwin who blasted home picking up two places over her 100m stretch.

Jessica Scanlon and Ruby Nolan were the other members of this squad, both ready to step in if required.

Although not finalists it was still an excellent performance from a team competing together for the first time in a Leinster championship.

Hope were high for the Boys U12 team in their 4 x 100m heat and they didn’t disappoint.

Cian Farrell led right from the start passing in first place to Padraic Fennessy who maintained the lead.

Ralph Tinsley took the baton next and extended the lead leaving it to Sean Reilly to see the team comfortably home.

In the final the boys found the going a bit tougher coming face to face with eventual champions Kilkenny City Harriers who broke the championship record along with local rivals Boyne AC who finished in second place. Although they didn’t make the podium the boys did themselves and the club proud.

Faye Tinsley, Kendell Kamftchou, Maebh Fee and Alex Bewley made up the Girls U14 Team that lined up for their 4 x 200 m heat.

The opening leg saw Faye lead out, handing over to Kendell, followed by Maebh with Alex closing things out. It was a battling performance from the girls against tough opposition and they were unfortunate to be run out of a place in the final.

Ciara O’Brien was the fifth member of the squad.

Last up on track were the girls U.16’s, consisting of the U17 bronze medal winners Sarah Morgan and Hannah Reilly, joined this time by Neassa Reilly and Laura-Jane Hearty.

As expected the girls delivered in their heat finishing in a comfortable second place to qualify in 4th place overall for the final.

Sarah Clarke stepped back in for the final in place of Laura-Jane however the exertions of all four athletes in heats and finals at other age levels had taken their toll and the team finished just outside the medals.

Day 4 saw Shauna McMahon return to competition in the shot put, this time at junior level where she gained valuable experience against much older athletes. However the undoubted star of the show was club coach Mary Scanlon who conclusively demonstrated that form is indeed temporary but class is permanent when she took home gold in her 60m sprint final, gold in her Shot Put competition, silver in her 200m final and bronze in her 400m final, a stunning achievement by anybody’s standard and one that the club is immensely proud of.

A fitting end to an excellent weekend.