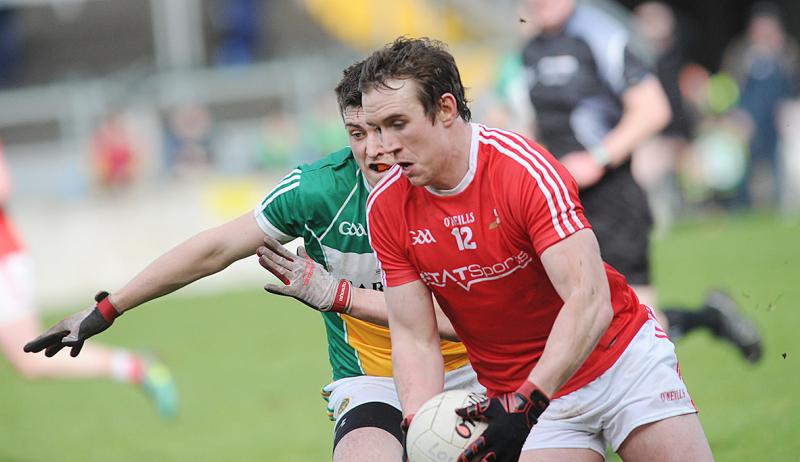 Promotion is now a real possibility for Louth after their latest swaggering performance against Offaly in Tullamore on Sunday.

Colin Kelly’s men look more assured with every passing fixture and they now sit proudly on top of the Division Three table with maximum points from their three games played.

Antrim, who Louth overcame in final of Division Four at Croke Park last season, are up next for the Reds who will no doubt go into the pivotal clash with fuelled with belief after this impressive display at O’Connor Park.

Racking up 2-3 on the day, Ryan Burns will deservedly get most of the plaudits but fellow U21 player Kevin Carr was immense throughout and Anthony Williams just continues to impress, tirelessly steaming down the left-hand side of the field.

Playing with the wind, Offaly started brightly with a Bernard Allen free and a Nigel Dunne point giving them an early two-point lead.

Like a young couple nervously checking into a hotel before making themselves at home, Louth eased their way into the game, feeling out the opposition and their surroundings with caution.

With Andy McDonnell on the treatment table, Declan Byrne was handed a start and he did exactly what he was brought into the side to do, firing over after a patient attack to get Louth off the mark.

Allen and Dunne hit back again for Offaly but Louth settled down when Burns hit his first goal of the day from a measured attack that at one stage looked destined to break down.

Bevan Duffy opened the play up with what can only be described as a dribbling crossfield ball. Despite the lack of pace on the ball, it found the intended target of Eoin O’Connor who worked the ball in for the Hunterstown forward to finish.

Louth smelled blood and Byrne added another point from a turnover in the next passage of play to give Louth the lead for the first time after 20 minutes.

Full forward Dunne struck two more in response for Offaly to edge them in front, 0-6 to 1-2, but it turned out to be the last time they held the upper hand.

The Faithful lost Brian Darby to a black card and Paraic Smith punished them by levelling from an intercepted kick out before Kelly’s side took the game by the scruff of the neck.

A Derek Maguire shot hung in the powerful wind, allowing Tommy Durnin to keep it alive and Burns displayed his poaching skills to fire home.

You could sense the visitors were losing their respect for Offaly as the game progressed. The second goal confirmed it.

Smith added another before Offaly midfielder Eoin Carroll lashed over a point from way out but Louth composed themselves just before the break to march up the field and win a free that Burns to convert.

Leading at half time against the wind, there was a feeling that Louth had amassed a body of work sufficient enough to see the game out and that belief was reinforced when St Pat’s man Eoin O’Connor tapped over from the throw in.

Offaly fired off three in a row to leave two in it but substitute Adrian Reid settled Louth’s anxieties with a fine point just at the right time.

Such was the level of assurance at the back that Louth never looked in trouble from open play while at the other end, Byrne, Durnin and James Stewart all got in on the act.

Burns, somewhat comically, had to tame a pesky moving ball before showing his dead ball class again. The youngster, along with fellow ‘inside man’ O’Connor capped a fine display with a flurry of points at the end to add a nice bit of gloss to the scoreboard.