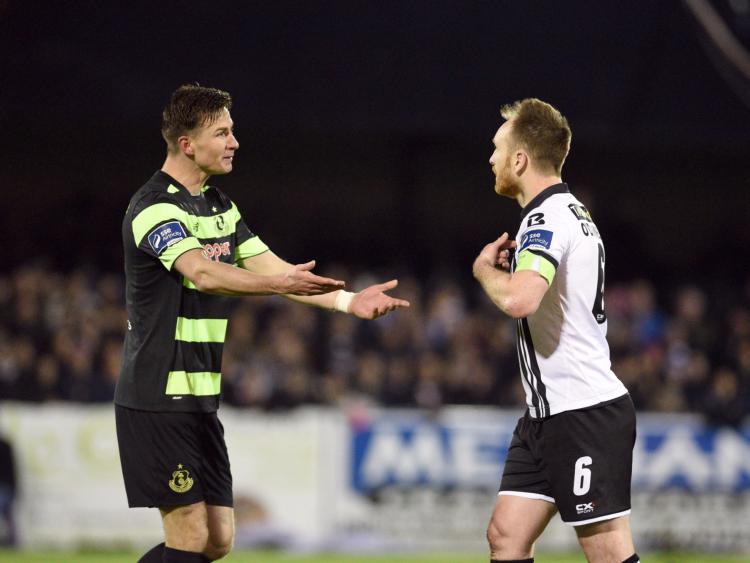 It wasn’t quite the return that Ronan Finn was hoping for at Oriel Park on Friday night.

The evening started well for the 29-year-old, a Dundalk fan thanking him for his contribution as he jumped off the Rovers bus to make his way into the ground. Gradually, however, it went downhill after that.

Named on the Rovers bench, Finn entered the arena in the 58th minute to a cocktail of cheers and jeers. Some applauded, some reacted like he was a mass murderer.

“I didn’t really notice it, to be honest,” Finn told The Dundalk Democrat afterwards. “I came on when we were two-nil down and I was just trying to come on and do well for the team. Whether I get a bit of stick or not, that’s just football but I enjoyed my time here at Dundalk. It was great.”

The mood darkened seven minutes later when he engaged in a bout of handbags with his old pal, Stephen O’Donnell. Dundalk v Rovers, friendship out the window, two of the league’s midfield heavyweights going eyeball to eyeball. It made for compelling viewing.

“I’d fight with my own mother on the pitch,” said Finn. “That’s just the way it is. I used to fight with Stevie every day on the training pitch. That’s his mentality and it’s my mentality!”

Finn's evening might have had a more positive outcome if Darren Meenan had taken a gilt-edged opportunity to draw first blood in the opening stages.

Pouncing on a Paddy Barrett error, the former Dundalk winger raced clear with only Gabriel Sava to beat. Luckily for the hosts, finishing has never been Meenan’s strong point and he guided his effort just wide.

“We pressed very well in the first 25 minutes and if we had gone 1-0 up it would have been a different game,” said Finn. “We were the width of a post away from opening the scoring but when you come to places like Dundalk you have to take those chances.

“We know they’re are a good side and they'd eventually get their foot on the ball and get it down and they punished us with the opening goal. It was sloppy from our point of view but that’s the level you come up against here.”

Rovers were left with an uphill task when Ciaran Kilduff notched his 21st goal for the club. Remarkably, the former Shamrock Rovers striker has now scored in his first league game for Dundalk in each of the past three seasons.

Graham Burke hauled the visitors back into it with a deflected effort but blotted his copybook three minutes later by tackling the static Jamie McGrath; a baffling decision by the former Aston Villa striker. Brian Kerr summed it up best on commentary: "He looks dumbfounded, but how can he be? He threw the boot in".

Despite that, Rovers almost snatched a share of the spoils when Dave McAllister turned a poor Brandon Miele free-kick onto the top of the Dundalk crossbar with the final kick of an absorbing game.

“When we went two down, I thought we rallied well,” said Finn. “We stood up and tried to keep probing and playing and Graham scored a smashing goal.

“There wasn’t much in the game and even with 10 men going into the last 10 minutes there was an opportunity for us to nick a point and we nearly did through Dave.

“I think we’ve earned a bit of respect tonight,” he added. “We’re a young side but I think we can play and we’ll get better. We can't lick our wounds for too long. We have to step up and be counted and go again next week.”