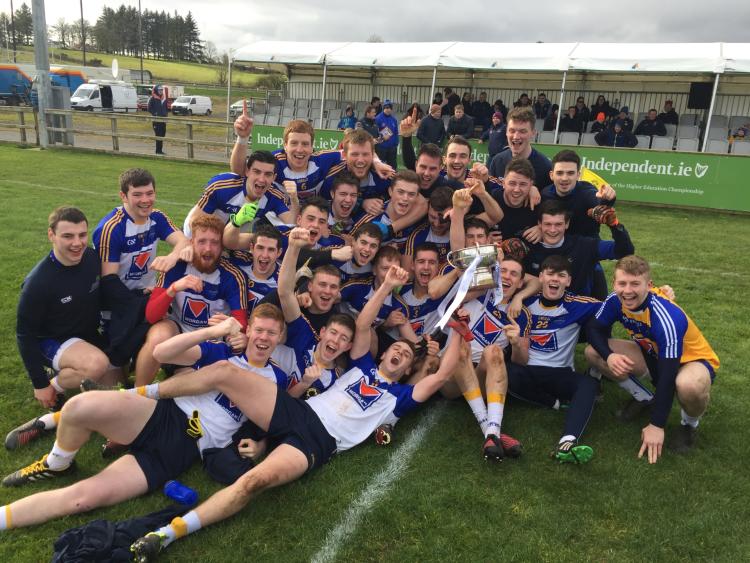 DkIT saw off Waterford IT on a 3-10 to 1-14 scoreline at the Connacht GAA Centre in Co Mayo at the weekend to retain their Trench Cup title.

Waterford IT came through a very tough semi-final match just one day prior when they beat Marino Institute of Education by one-point in a very tight contest.

DkIT, on the other hand, had a very comfortable victory over Blanchardstown IT, running out 1-18 to 0-3 point winners.

With confidence levels through the roof, and the experience and leadership of Oisin McConville and Shane Lennon in their favour, DkIT were more than ready to regain their crown.

DkIT shot out of the blocks with a goal from Gerard McSorley, who missed the semi-final due to suspension, pushing Dundalk straight in the lead with just one minute of the game down.

The game dipped for the next 10 minutes until Monaghan man, Niall Kearns sailed through the air to collect a ball and raced up the field hand to toe and send the ball through the posts to put DkIT up on a score line of 1-1 to 0-1; a point fitting for the hallowed turf in Croke Park.

WIT continued to keep the game close by tagging on seven scores from free kicks; however, DkIT kept their noses in front with scores from Dean Maguire and Tadhg McEnaeney.

After a very stop-start first half which saw DkIT miss out on two goal chances while playing into the wind, the Dundalk side went into the break 1-5 to 0-7 ahead.

Knowing that WIT had wind advantage in the second half, Oisin McConville’s men tore into the WIT defence with a great break through the middle from Eunan Walsh who created an opportunity for Tadhg McEnaeney to coolly slot into the top corner. This put DkIT four points up just one minute into the second half.

DkIT went on to dominate the next 10 minutes of the game tagging on scores and keeping possession with Niall Kearns, Eunan Walsh and Dean Maguire seemingly in cruise control.

A sensational one-handed catch from Donal Meegan and a pacey break from Dean Maguire who blasted home DkIT’s third goal of the game left DkIT nine points ahead and with just 15 minutes left, it looked certain that the Trench Cup would be heading back to the northeast.

However, Waterford made it clear that they were not going to let this happen without a fight as they started to eat back into DkIT’s lead.

Worryingly for Oisin McConville and his men, WIT snatched at plenty of opportunities and with four minutes remaining the Waterford side broke down the DkIT wall and finally got the goal they needed.

With just two points in it, and WIT battering at the DKIT rearguard, they received a free kick 30 metres out but with no time left on the clock, they dropped a ball into the goal mouth.

Meathman John Smith soared through the air to collect a ball only to be pushed over the line. With everyone’s hearts in their mouths, the ref blew for a free out and then for the final Whistle. Fear turned into joy on the faces of the DkIT elite as they punched the air in celebration.

Captain and Monaghan man Kieran Duffy stepped up to collect the cup while Louth man Tadhg McEnaeney collected the man of the match award for his 1-12 contribution to the Trench Cup Weekend.