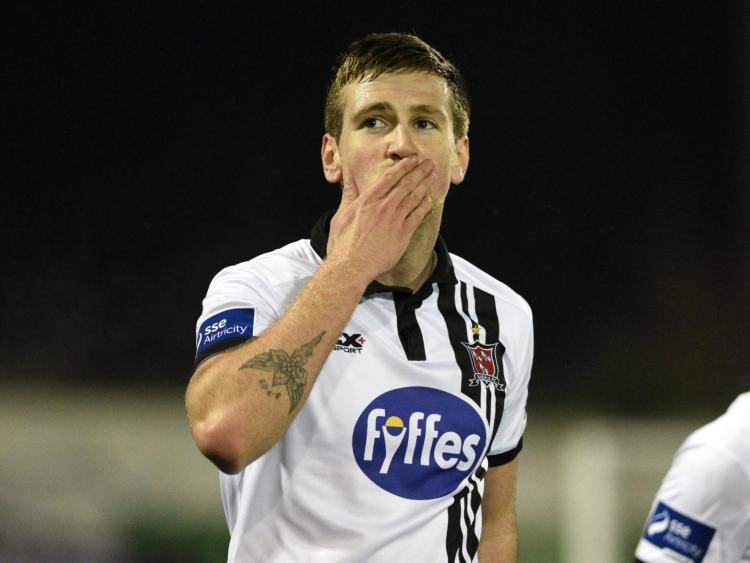 Paddy McCourt might not be signing for Dundalk but Lilywhites manager Stephen Kenny believes he already has the ‘Derry Pele’s’ heir apparent at the club in the shape of Patrick McEleney.

Dundalk’s bid for a fourth success SSE Airtricity League title kicks off against Shamrock Rovers on Friday night and Kenny’s intention is to build his revamped team around McEleney.

Going by his performances in pre-season, the 24-year-old certainly looks up for the challenge. Cork City may have run out comfortable winners in the President’s Cup at Turner’s Cross but McEleney was the best player on the pitch.

“Patrick was very lively and looked brilliant at times,” said Kenny. “Players like him are unique. There hasn’t been a player like him, talent wise or as good as him, in the league for the past 15 years. Paddy McCourt was probably the best but I think Patrick is different.”

Niggling injuries hindered McEleney’s debut season at Dundalk. He started just 16 of the club’s 33 league games and was sidelined for almost three months with groin and hamstring issues.

With that in mind, he worked hard on his fitness back in Derry over the new year period before joining up for pre-season training with Dundalk. In Kenny’s eyes, an injury free McEleney will take some stopping.

“I just hope he can stay fit - because his body can let him down,” said the Lilywhites boss.

”I gave him his debut at 17 when Derry City were in the first division and he was brilliant. I think he would have progressed quicker but he had a couple of indifferent years due to injury.

“When he came here last year he was still getting over that period and he had a couple of injuries which did halt his progress but he is on a great run of sustained training at the minute.

“If things go well in that regard, I think he will go through the roof and I think he could be anything, I really do.”

McEleney has operated in his favourite position during pre-season, the ‘number 10’ role, just off the main striker. He was regularly asked to do a job elsewhere last year but Kenny plans to let him wreak havoc from a central position.

“There’s no doubt that’s his best position. He can play wide, and he can do it well. He’s probably better on the left than on the right but he played on the right for us at times last year to suit the team.

“At times we played with Daryl Horgan on the left, three flat midfielders - where we had no number 10 - and Patrick on the right but in a central role, he can be devastating.

“Whoever plays alongside him, will score goals,” he continued. “All of the strikers want him in that position because they know he will create chances.

“When we went up to the Premier Division with Derry in 2011, Eamon Zayed scored over 20 goals. Eamon never got that amount before but playing with Patrick really benefitted him.

"David McMillan was the same last year and Ciaran Kilduff loves playing with him aswell.

"The one criticism is that he didn’t score enough goals last year. If he can do that it will really elevate his performances and his status as a player.”

With Horgan now at Preston North End, Kenny feels McEleney is ready to assume the mantle of Dundalk’s talisman. Both players have similar character traits, on and off the pitch, and prefer to keep a low profile.

“You won't see Patrick on Twitter promoting himself,” smiled Kenny. “He’s a different personality to most players but he’s a very decent person and he’s very popular.

“I have no problem singling him out. He is our most talented player - and could be the most talented of them all. We’ll just have to wait and see."