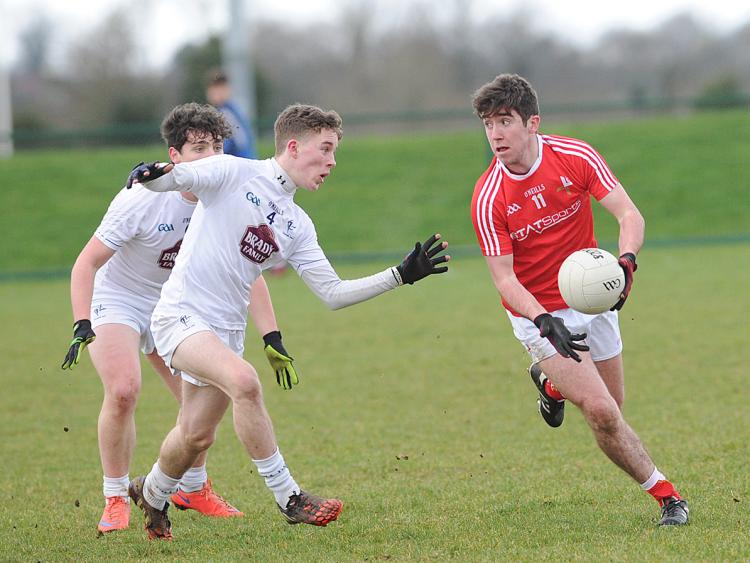 The blustery conditions at the Centre of Excellence in offered both sides a surprising advantage. Going against all traditional GAA doctrine, both teams performed better when they played against the wind.

Slick Kildare forward play, led by Leixlip’s Jack Barrett, was the difference on the day, the corner forward hitting 1-3 in the first half that laid the foundation for the reigning Leinster minor champions’ victory.

In the first attack of the day, Louth corner forward John Gallagher’s effort whipped in the air and hung for an age before finally bouncing over the bar.

Due to the ferocity of the wind Kildare were forced into the ball in the first half and this paid huge dividends for them.

The aforementioned Barrett introduced himself into the game with a free. He then used all the presence of a true finisher to palm the ball to the net after a driving run from Tuohy.

The Kildare full forward outpaced his marker on the solo run and drew the Louth . Barrett held his ground and waited to receive the hand pass before calmly finishing.

Louth responded with a free from Gallagher with the very next attack and Conor Morgan got Louth’s last score of the half in the 12th minute to make it 1-1 to 0-3.

Kildare dominated the rest of the half, both in possession and on the scoreboard.

Captain David Kelly pointed and Barrett swivelled on the D to neatly point before Lilywhites manager Gay Campbell freshened his side up with a host of replacements on the mark.

Barrett and substitute Cully notched two frees to make it 1-5 to 0-3 at the interval.

The home side started the half in determined fashion, forcing Kildare substitute goalkeeper Aaron O’Neill into a tremendous save just seconds after the restart.

Louth midfielder Ben Mooney did hit the net but in the next attack, cornerman Gallagher rattled the crossbar. Things may have panned out differently if it was a couple of inches lower.

Ardee St Mary’s player Conor Gillespie pointed to leave one in it but Wee County boss Wayne Kierans was left to rue his side’s missed chances.

Louth’s indiscipline in the scoring zone cost them as three Kildare frees in a row closed out the game with Kelly (0-2) and Hosey on target before Conor Nicholson landed a free in consolation for the home side.