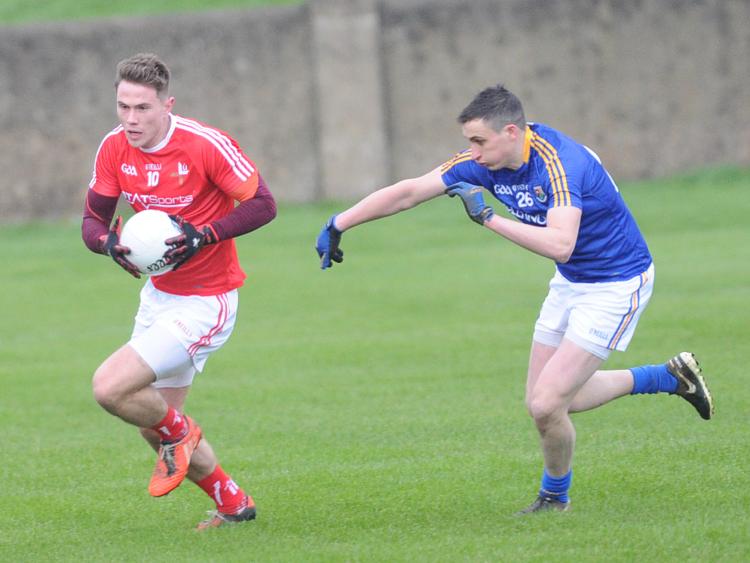 James Stewart gets the better of Longford's David McGivney

Pretty in Portlaoise the previous week, nothing more than workmanlike at Drogheda on Sunday. No-one with an interest in the Louth team is likely to be over-concerned, however

The National League's Division Three campaign is just two rounds in the making and already Colin Kelly's charges sit on top of the table. The chances of them maintaining their status have improved – those who are inclined to get ahead of themselves are probably thinking in terms of a serious challenge for promotion. But better to park that one for a while.

There was plenty to conspire against an O'Moore Park encore on Sunday for the visit of Longford, not least the conditions in which the game was played. A heavy pitch didn't allow for a 'lively' ball, - which this physically-challenged Louth team is best suited to - and a bitingly cold wind made it very difficult for the team playing into the hospital end goals.

Louth had the advantage in the opening half and quick to use it, four unanswered points in the first 10 minutes making the perfect start. Three of the scores came from Ryan Burns frees; is there any need to emphasise just how important it is to have a reliable place-kicker on board?

There was to believe that the lead would be increased by the interval, but it wasn't. Longford, also reaping a decent reward from their free-taker, were within four points at the break, and that was enough to cause concern among the home contingent.

Longford didn't get the chance to really exploit the assistance they had the wind in the third quarter, which ended with Louth leading by 0-10 to 0-5. The home defence was frugal in the extreme, and Tommy Durnin - providing his Westerns club with a first permanent representative on the county side since Martin Fitzpatrick wore the red jersey back in the 1970s - was good at midfield. The big man is forming a decent partnership with the more experienced Andy McDonnell.

Important as well was the forwards' contribution. Three points may not have been that big of a haul, but it was more than Longford could muster, and it seemed all that was required was for discipline to be maintained in the final passage.

That didn't happen. Frustrated perhaps by some of the referee's decisions, Louth needlessly gave frees away, and four points had Longford within touching distance. Those who keep a strict eye on the clock say that the ref played only three of the four minutes allotted for stoppages. While Longford raged after the game, Louth celebrated in a restrained manner.

If he hasn't already done so, Kelly is likely to be reminding his team about what happened in his first league campaign in charge, two years ago. Unbeaten after two rounds, Louth went into a tailspin, the competition ending with relegation to Division Four for the first time in the county's history.