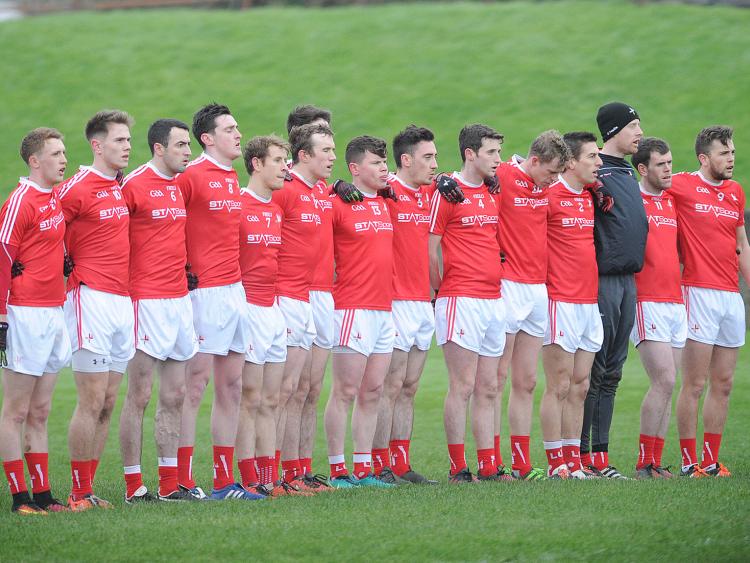 The Louth team that beat Longford on Sunday

Trailing by a single point, the Midlanders were on the front foot when referee Niall McKenna blew for full-time despite playing less than the four minutes that were indicated.

Connerton described the official’s action as ‘inexplicable’ and Kelly said he could see where his counterpart was coming from.

“I wouldn't like to be in that situation myself,” admitted Kelly. “As I said to Denis, it is out of our hands what the referee does in terms of time, but if it was Louth we'd be disappointed as well.

“In fairness it was probably flattering for Longford to be a point behind at that stage and if we hadn't taken two points from the game it would have been very disappointing from a Louth point of view.”

Although the finish was a lot more tense than many expected, Kelly said he expected a tough encounter.

“Longford are a good side. I seen them play last week against Offaly and I've done a good bit of analysis on them down through the last couple of weeks.

“I’ve watched their championship performances and some of the results they got in Qualifiers would suggest they are a good side.

“They competed comfortably in this group last year so we knew it was going to be difficult and they were probably a step up from what we played last Saturday against Laois,” he added.

The victory leaves Louth sitting on top of Division Three with a 100% record after their opening two games, the kind of consistency that Kelly is looking for.

“We said all week at team meetings that it’s about getting a standard performance. The application from the performance against Laois has to be the standard for this team. That’s what we need to get to.

“Can we be better than that? Today we showed a different side to us. It was gritty and it was determined and I knew by the way we set up, and the way we play, that even against the wind, it wasn't going to impinge on us that much.

“It did in terms of shooting, but not in terms of how we transitioned the ball into the scoring zone. I knew we'd get opportunities and once we were ahead at half time it meant they came chasing the game and we could sit back and suck it up and that’s the way it proved,” he continued.

“We probably should have been three or four points further ahead and we missed a couple of really good opportunities towards the end of the match but it’s two points, we're top of the league and it’s a nice place to be.”

And with no game until Sunday week, Kelly said his players had earned a couple of days off to rest recover and maybe even receive some TLC from loved ones!

“We are carrying little struggling knocks there. Derek Maguire has a tight back, Andy McDonnell has a dead leg, Jim McEneaney is carrying an ankle knock.

“Ryan Burns has had a big program of games this past couple of weeks with the Sigerson Cup and with us and Kevin Carr has had a big workload too,” stated Kelly.

“It is great that we have a few days off now and they can go back and enjoy tonight and enjoy Valentine's Day. It is a good position to be in looking forward to the Offaly game in two weeks time.”