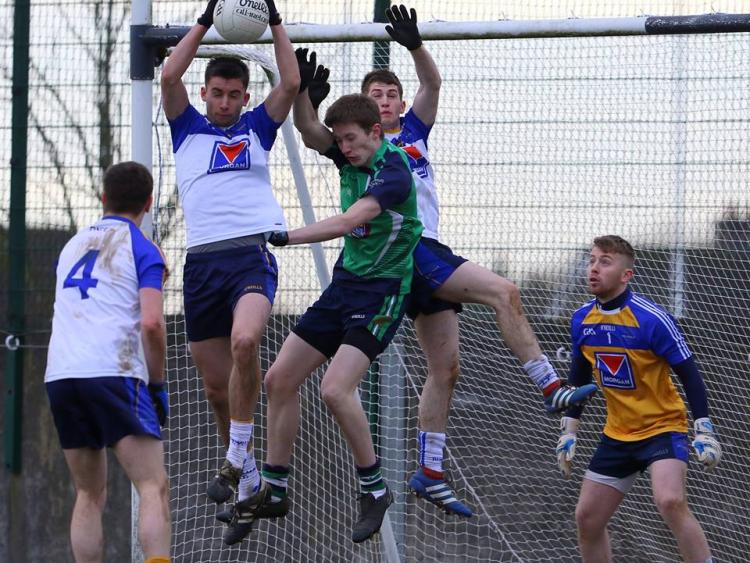 The pressure was on for Dundalk Institute of Technology (DkIT) GAA Seniors this week as the team set out to defend its Trench Cup title against strong competitors, Limerick IT (LIT). Nerves were high as DkIT prepared for the match which took place on Wednesday 8th February in Limerick IT Sports Grounds which is overlooked by Munster’s Thomond Park.

At the match line-up it did not look promising for DkIT as they stood alongside their Goliath-like components, six of whom are 6ft 6, full of muscle and would not have looked out of place on the pitch at a Heineken cup match. To onlookers, it appeared that a battle of David vs Goliath was about to commence.

After the first 10 minutes the game was finely poised at 1-6 to 1-3 in DkIT’s favour after an incredible team goal finished off by Tadgh McEnaeney and an inspirational captain’s point from 45 yards on his weak side from Kieran Duffy, placing DkIT just inches in front. Following this, Gerard McSorley and Tadgh McEnaeney went on a rampage and scored 1-5 between them. This brought the first half to a close and left defending champions in a comfortable position with the score set at LIT 1-5 to 2-11 DkIT

The second half saw a very cautious start from DkIT as LIT knocked at the door continuously with heroics in defence from John Smith and Colm Meegan who help keep the score down.

Despite strong possession in the first 10 minutes of the second half, LIT only secured 3 scores. This seemed to frustrate the home team whose lack of discipline and possible tiredness came back to haunt them with two late tackles and they lost two men to red cards.

In response, DkIT turned things up a gear showing real champion performance by taking back possession and tagging on the killer points from Eunan Walsh and Robbie Curran; much to the agitation of the opposition.

During DkIT’s bouts of possession, DkIT’s main man was dragged to the floor by two LIT players and a skirmish ensued with a DkIT player being handed a red card for an off the ball incident spotted by the referee’s umpire behind the goals. This brought the game to conclusion with a score line of LIT 1-09 – 2-14 DkIT.

DkIT will now take on Blanchardstown IT in the semi-final next weekend in the Connaught Centre of Excellence outside Castlebar.