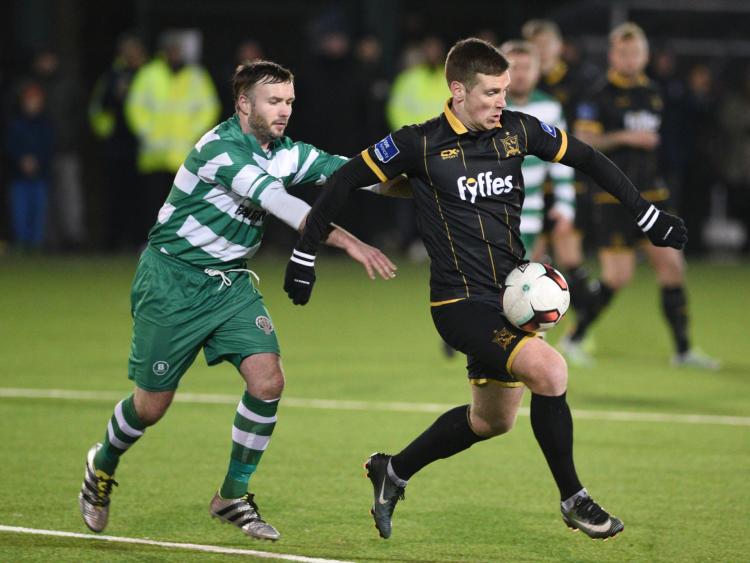 Dundalk’s Patrick McEleney gets away from Graham Hannigan of St Pat’s CY in the Leinster Senior Cup game in Dublin. Picture: Ciaran Culligan

Patrick McEleney was the star of the show as Dundalk advanced to the quarter-finals of the Leinster Senior Cup thanks to a 4-2 win over St Patrick’s CY in Dublin on Thursday night.

A number of Dundalk fans braved the biting cold to take in their side’s first competitive game of the year and McEleney's performance would surely have warmed their hearts.

The Derryman caught the eye in Dundalk’s opening game of pre-season against Glenavon in Lurgan and he backed that up by playing a big part in each of the opening three goals here before rounding off a decent night’s work for the League of Ireland champions by scoring the fourth in stoppage time.

The journey to Ringsend is fast becoming a familiar one for Dundalk supporters. The Aviva Stadium provided the backdrop with Irishtown native Sean Gannon, whose parents house was also in view of the astroturf pitch, handed the captain’s armband for the night.

Despite a number of players sidelined with niggling injuries, Kenny named a strong side with new boys Conor Clifford and Niclas Vemmelund included. However, there was no sign of Paddy McCourt who earlier in the week seemed to pour cold water on the prospects of moving to Dundalk.

After making his return from a calf injury in the 6-0 win over CF in Spain three days earlier, Gary Rogers retained his place between the posts but his night came to a premature end after just five minutes when he limped off to be replaced by Gabriel Sava.

The hosts, with former Lilywhites midfielder David Cassidy operating in midfield, started at a frantic pace but Dundalk settled into things with McEleney's class there for all to see.

His attempted chip over Pat's goalkeeper Sean Coffey almost put Dundalk in front after 25 minutes. Prior to that, Coffey gathered a deflected Paddy Barrett effort.

Youngster Carlton Ubaezuono was given a chance to impress and his 37th-minute goal separated the teams at the break. McEleney was instrumental, finding Ciaran Kilduff who put the ball on a plate for Ubaezuono to rifle home with his right foot.

McEleney fired a free-kick just off target in the early stages of the second-half as Dundalk took control and John Mountney saw a goalbound header knocked off the line by Pat's defender Thomas Walsh.

A rapid counter-attack led to the second goal just short of the hour mark with Ubaezuono releasing McEleney on the left and his centre was converted by Kilduff, despite the best efforts of Coffey.

That looked to be that but the Leinster Senior League side hauled themselves back into things in the 64th minute when Cassidy stabbed home following some uncertainty by in coming for a cross.

To their credit, Stephen Geoghegan's side refused to wilt and they were thrown a lifeline when Sava's woeful clearance found the feet of substitute Dean Gannon who returned the ball with interest to find the empty net.

That gave the hosts some impetus approaching the final five minutes but McEleney had the final say, picking up a Dane Massey pass to dance his way around a couple of challenges before beating Coffey at his exposed near post.