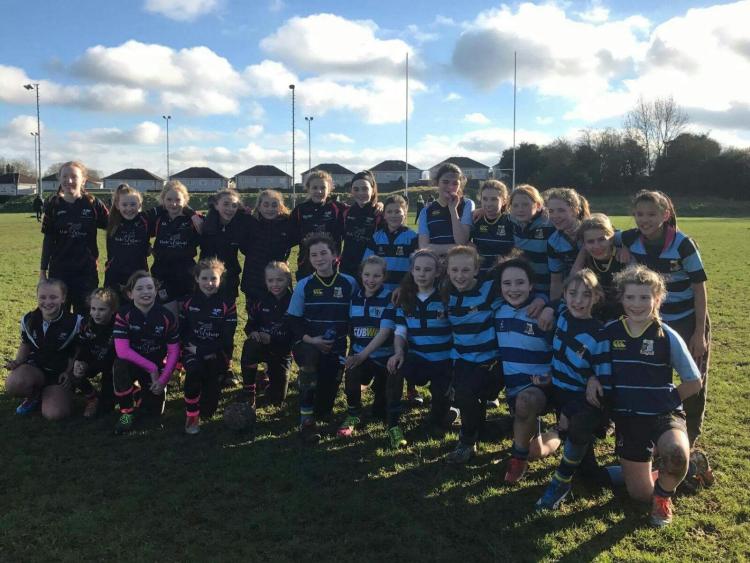 The Dundalk RFC U13 girls team

Dundalk RFC’s U13 team travelled to Navan on Sunday to compete in their first blitz of the year.

The girls were straight down to business in their first match against Navan’s A team.

Sophia Murdock opened the scoring in the first minute of the game, running from the halfway line and this pattern of play continued with Sophia securing another try by breaking through the Navan defence.

The hosts picked up the pace and managed to run in two tries to level the scores at half-time.

Dundalk’s second half performance was quite exceptional with the Mill Road outfit securing four more tries through Lily McEnteggart and Sophia Murdock.

Dundalk’s defence was magnificent from start to finish and the girls displayed great team spirit overall.

Navan’s B team provided a stiffer test in their second game, beating Dundalk by six tries to two.

Dundalk’s final game was against the combined team of Naas and Virginia and they got off to a flying start when Bronagh Hughes powered through the Naas/Virginia defence.

The scoring continued with Dundalk in a good position going into the second half with three try advantage.

Naas/Virginia bounced back into the game in the second half by scoring two tries but they could not contend with the fantastic tackling from Saorla O’Mara and the powerhouse herself, Mia Coan.

Dundalk won the game comfortably by eight tries to three with spectacular tries also coming from captain Lily McEnteggart, Bronagh Hughes, Sophia Murdock and a brace of tries from Jennifer McElroy who came into the first game like a lamb and finished like a lion!

A huge thank you to John Molloy and Navan RFC for organising this very successful event and for their hospitality and refreshments supplied afterwards.

Thanks also to Zak Coan, David Murdock and Zoe Valentine who travelled. Zak and David’s input over the past couple of months has proven invaluable.

Dundalk RFC would like to wish team member Aoife Purcell a speedy recovery.