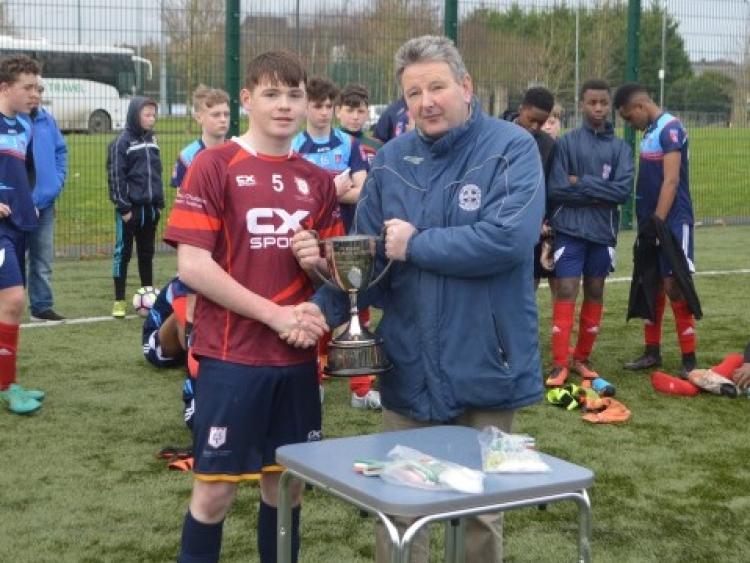 There was a novel pairing in the North East Leinster League Cup final in Muirhevnamor last Friday where two newly-formed schools competed for the trophy.

Ballymakenny College from Drogheda were the opponents in the decider, a school, like Dundalk’s Coláiste Chú Chulainn, that only opened its doors for the first time in 2014.

Beaten semi-finalists last year, Coláiste Chú Chulainn went the distance this time at only the second time of asking.

Ballymakenny were also making their first appearance in the competition’s final – ensuring that there would be a new name engraved on the trophy whatever the result.

The sides had previously twice this year with Ballymakenny winning 3-2 in the league and Cú Chulainn progressing at the expense of the Drogheda school in the Leinster Cup on a 3-1 scoreline.

The Dundalk side started Wednesday’s final well and seemed to have their rivals pinned back from the off.

However, spurred on by a vocal support, Ballymakenny took the lead in the 10th minute. A long through ball was held up by the swirling wind and allowed the Ballymakenny striker to steal in and slot it past the mistimed run of the onrushing Cú Chulainn goalkeeper, Jack McKenna.

Parity was restored thanks to a sublime free kick from Adam Lennon whose effort rose up and over the wall and neatly past the sprawling Ballymakenny custodian.

With the wind at their backs and in their sails, Cú Chulainn pressed on and dominated the first half although their second goal was a long time coming.

It took another piece of magic, this time from Joe Mee, to undo the resolute Ballymakenny defence; Mee curling a long-range effort in from distance to ensure the Dundalk side went into the break ahead.

Coláiste Chú Chulainn had to defend much more in the second half but they extended their lead after a lengthy spell of pressure finally paid dividends. Neat play on the edge of the box led to a cross which Caolán McCabe finally managed to poke home.

Ballymakenny College pulled one back to make their north Louth rivals sweat in the closing phases of the game.

The Drogheda school then hit the bar in the dying stages before an injury time counter-attack resulted in McCabe notching a brace and putting the result beyond doubt.

There was no rest for the Dundalk lads, however, as they were due to take to the field again yesterday (Monday) to take on Arklow Community School in a Leinster Cup semi-final.