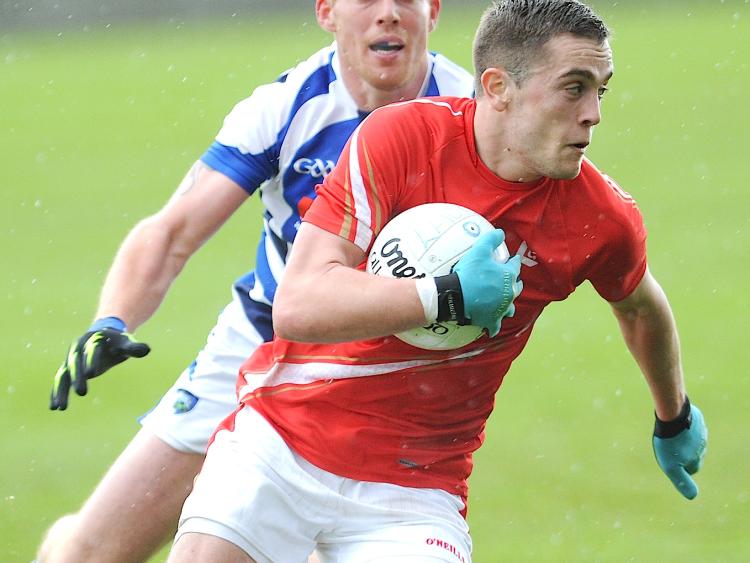 Andy McDonnell, who scored in Louth’s win over Laois on Saturday night, in action against the O’Moore county in the Leinster SFC match in Portlaoise in May 2013

Louth’s senior team have a good recent-year record at O'Moore Park in Portlaoise. It was enhanced in spectacular fashion on Saturday night.

Having the previous week seen a good O'Byrne Cup run ended by an outfit comprised of Dublin hopefuls trying to find favour with Jim Gavin, the team pieced together by Colin Kelly and his cohorts made a hugely encouraging start to their Division Three league campaign.

The dividing margin could have been greater, while at the same time had Laois not taken so long to establish where the posts were, they mightn't have had their supporters leaving before the finish.

But that's by-the-by; Louth were by far the better team, playing a lot of very attractive football to win the first of their three away games. If this proves to be more than a one-off, the spring campaign could yield more than just staying put in Division Three.

It's already been decreed where 'home' is for the other four ties – the much-discussed, controversial and, we are told, the soon-to-be-redeveloped Drogheda Gaelic Grounds, with its grassy banks and undulating playing area. However, nothing is written in stone, and as has happened in the past, other venues have had to open their gates in an emergency, most notably when the Drogheda pitch wasn't playable.

This page made a suggestion in the summer of 2013 that Louth should consider switching their championship second-round match with Longford away from Drogheda – to perhaps Pairc Tailteann, or St Brigid's Park. Instantly dismissive wouldn't describe how some people, especially Co Board personnel, reacted.

The Paddy Keenan-captained side had just beaten Laois at last Saturday night's venue, giving a vintage performance, the very best Aidan O'Rourke extracted from his charges in his two-year stint as manager. Next up was a home game with Wexford, and it wasn't the Gaelic Grounds' restricted capacity that had us suggesting a switch, rather its dissimilarity with the pitch where a much better Laois team than today's had been demolished.

Every square metre of O'Moore Park was exploited that Sunday afternoon. Goalie Neil Gallagher made judicious use of his kick outs, playing many of them wide to allow Keenan and his midfield partner, Brian Donnelly, avail of the space on the wings, and though this was well into the crossfield pass and ball-retention era, Louth added lustre to their performance by nearly always posting long passes to the full-forward line, where Shane Lennon was quick off the mark, he, too, making perfect use of the space all around him. It ended 1-16 to 1-6, the home team's goal coming with time almost up.

Craig Lynch was maybe quicker – Cluxton-like – than Gallagher with his kick outs, but he and the receivers knew what was happening, and just as Lennon was a target then, this time Jim McEneaney was singled out for a pass most times the team advanced on the Laois goals. The full-forward was a constant threat, and you just wonder how he hasn't been a permanent fixture over the past few years. Andy McDonnell and the fast-improving Tommy Durnin formed a solid midfield partnership.

Back to 2013. Just a fortnight after Laois had been put in place, and Inside Track's suggestion was dismissed, probably not even given a second thought by those who could effect a change of venue, Louth lined up against Wexford.

It was if all that was good at Portlaoise didn't happen, or, perhaps, couldn't happen. There wasn't the same movement, and kicking into a more congested area, Gallagher's deliveries didn't yield a dividend. Wexford won by 2-13 to 1-15.

Louth were back in Drogheda for the All-Ireland qualifiers, and this time there was a win, over lowly Antrim. Next time out there was a game but unrewarding performance against Kildare at Newbridge, and it was on this evening we had greatest cause to regret Ciaran Byrne's imminent departure to Down Under.

This is a different Louth team than the one of four years ago. It's also singing off a different song sheet. Maybe it will be better able to adapt to the Gaelic Grounds contours, starting with Sunday's second-round meeting with Longford.

There's evidence, however, which suggests Kelly's men would be happier in different surroundings. Their best O'Byrne Cup performance was in Pairc Tailteann, while, arguably the poorest was in the Drogheda tie with Dublin.