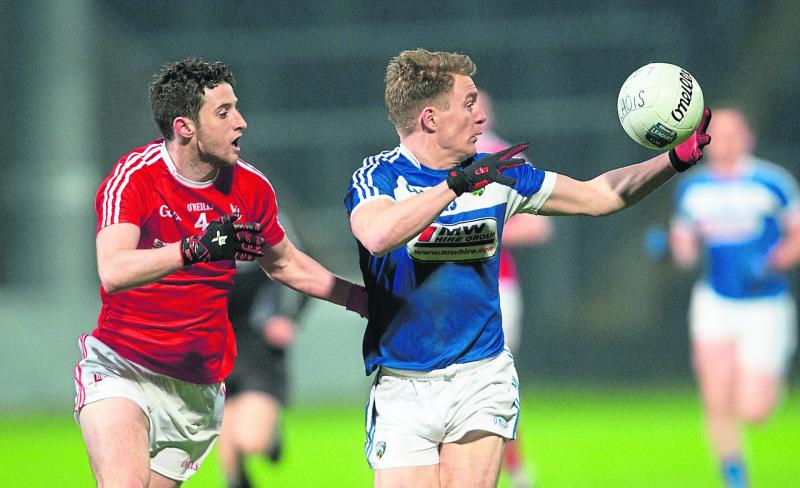 Louth’s Allianz National Football League Division Three campaign got off to an impressive start as goals from Paraic Smith and Andy McDonnell helped Colin Kelly’s side to a very encouraging 12 point win over Laois on Saturday evening.

Under the bright lights of O’Moore Park, it was apparent from very early on that opening night nerves was affecting only one team, and it wasn’t the Wee County. In a game they never looked like losing, the travelling Louth side full value for their win, providing a five-star performance in the process.

Smith and his Clogherhead teammate, Anthony Williams, made themselves at home in Portlaoise, spearheading Louth’s faultless start to their league campaign and sending the hosts back to the drawing board.

The recent O’Byrne Cup run really stood to Louth as they dominated the early proceedings. One could notice the extra match practice clearly in the ball movement and point taking as Louth shot into an early lead of 1-4 to 0-2.

Smith got the goal, the result of a driving move with the aforementioned Williams that came down the middle. It was put together with such pace that Smith’s momentum solo took the Dreadnots man past the goalkeeper to calmly pass to the net.

Deployed at centre-forward, Smith revelled in the vast open pitch and he added two points before setting Ryan Burns up for one of his pair of scores. A footnote to Burns’ second, it was a free kick out of his hands with his weaker left foot.

Laois talisman Donie Kingston responded both times for Laois, but defensively the visitors constrained the to efforts in bad positions. They notched eight wides in total in the first half which sucked the life out of them in front of their home crowd.

Attacking in waves, Laois weren’t able to track Louth’s runners. Bevan Duffy got in on the scoring act before Smith added another. Andy McDonnell then opened his account and Ruairi Moore fired over too.

Danny Luttrell countered for Laois to blaze over when a possible - and needed goal looked on the cards - to make it 1-8 to 0-3.

Louth took the foot off the gas and the half ended with a mini Laois revival. Kingston landed a free before Stephen Attride finally found his range from way out. Kingston again, this time from play, reduced the Louth lead at half-time to five, 1-8 to 0-6.

Bevan Duffy, better known for his work rate and effort, displayed another side of his game to slot over a sweet point on the run to open the second half.  After an error in the Laois backline, it could have been even better for Duffy, but with an open goal at his he somehow managed to miss. In near slow motion, the ball trickled wide.

Kingston replied with a free for stuttering Laois and they desperately threw in replacements to try and claw a way back into things.

Louth, however, were able to keep and probe the ball around with ease at times and Williams got on the scoresheet with a composed finish which was followed up by a Tommy Durnin point following a patient move.

With 20 minutes remaining, the result was put to bed with an excellent Louth goal. Two visionary, diagonal crossfield passes in a row opened the Laois defence up. Going from right to left, Smith started it off with receiver Burns laying it off to Ruairi Moore who dinked it on for the onrushing McDonnell who finished with aplomb.

Substitute Gary Walsh and another Kingston free offered Laois a futile response before Colm Begley saw red for a second yellow card. The sending off summed up Laois’ night.

Louth could now afford to ease their way out of the game, emptying the bench in the process. The home supporters departed early but Louth continually punched holes, scoring five points in a row.

A Ryan Burns free was followed up by Williams, who capped a fine evening’s work with another score before Smith, midfielder Durnin and debutant Ross Nally all added further efforts before the end.

Kieran Lillis stopped the rot, right at the death for a hapless Laois side who will worry about their safety in this competitive division while Louth can only but look ahead to the year with plenty of hope.