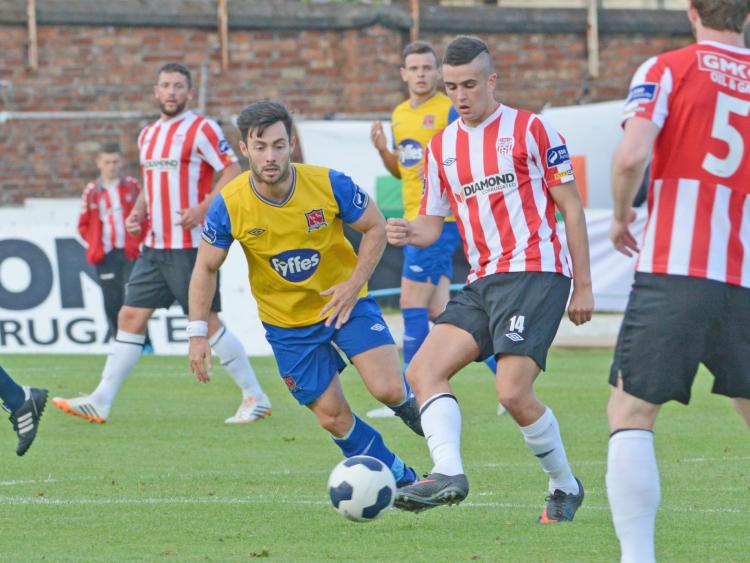 Michael Duffy in action for Derry City against Dundalk in the 2-2 at The Brandywell in June 2014. Duffy scored Derry’s second goal of the game - a 25-yard screamer. Picture: Ciaran Culligan

Former Derry City winger Michael Duffy should have no problems settling into his new surroundings at Dundalk.

Duffy completed his move from Celtic on Tuesday night, signing a two-year deal with the League of Ireland champions, and joins an ever growing contingent of former Derry stars at Oriel Park.

Patrick ‘Fats’ McEleney - a former teammate of Duffy’s at The Brandywell - is also one of his closest friends while the 22-year-old is also very familiar with Niclas Vemmelund, who was one of Derry’s star men in 2016, and the ‘Derry Pele’ himself, Paddy McCourt, who is currently training with the Lilywhites.

Dundalk’s opposition analyst, Ruaidhri Higgins, spent seven years with Derry City and also played alongside Duffy while Stephen Kenny led the Candystripes to a host of trophies during two spells in charge between 2004 and 2011.

“I have been speaking to Fats a lot and he has been telling me that it’s a good squad and I’ll get on with the boys,” Duffy told The Derry News.

“I was only a young boy growing up when Stephen Kenny was at Derry. He took me for a training session once and that’s all I remember but what he has done with Dundalk, and even what he’s done in Ireland has been great and I’m really looking forward to working with him.”

Wearing the number seven shirt vacated by Daryl Horgan, Duffy made his Lilywhites debut in the 2-0 defeat against Espanyol B in Spain on Thursday morning, just hours after joining up with the squad at their training base in Salou.

Dundalk fans had an anxious wait to see if the club would secure his services before the UK transfer window closed on Tuesday night but the deal was announced shortly after Celtic recalled the Northern Ireland international from his loan spell at Dundee.

He returns home after failing to make the impact he wanted at Parkhead following his move from Derry City in 2014. He signed a four-year deal with The Hoops but didn’t feature in the first-team and was sent on two season-long loan deals to Alloa and Dundee.

“Celtic is a massive club and I knew that it was going to be hard but that was my goal,” he said. “I signed with Celtic to play with Celtic.

“It was always going to be difficult,” he continued. "I am disappointed it didn’t work out, but that’s the thing when you sign with such a big team.”

He played 38 times for Alloa during the 2015/2016 campaign but endured a frustrating spell at Dundee this season, starting just four league games.

“I enjoyed my time at Dundee,” he said. “I got on well with all the players and the manager but once things started to get tough and there were changes to the team, it just made it a bit hard for me.

“I just thought I deserved more of a chance over the last two months so it was frustrating. I wanted to play and I don’t want to be sitting on the bench, so it became clear that I had to go elsewhere.”

Kenny was quick to make his move and Duffy is hoping that a move back to the familiar surroundings of the League of Ireland will kickstart his career.

“I just want to get back to playing and enjoying my football,” he said. “I’m delighted to sign with Dundalk and I’m looking forward to the challenge.

“I’ve seen how well they have been doing with Stephen Kenny in the past few years, especially last year. They were amazing. I’m hoping now that we can do the same this year.

“It will be different because Dundalk will be expecting to do even better but I’m looking forward to it.”