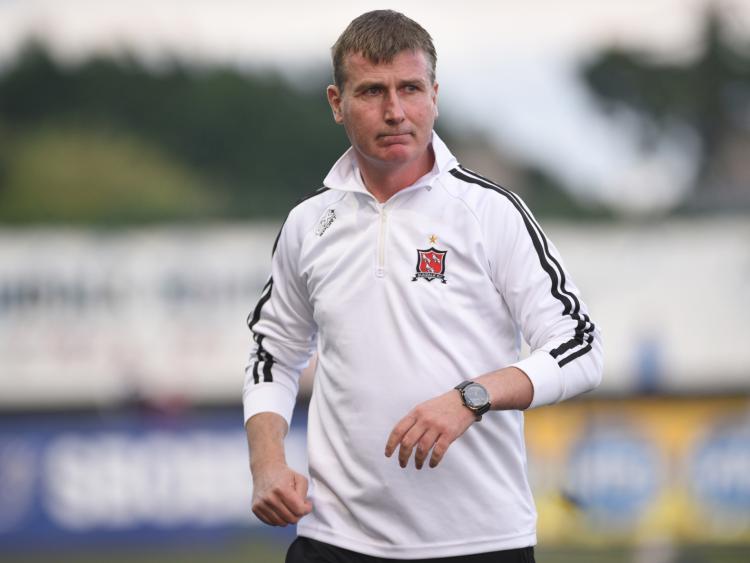 Dundalk manager Stephen Kenny has yet to decide if he will offer Paddy McCourt a contract with the League of Ireland champions.

The ‘Derry Pele’ started training with Dundalk last week and played 69 minutes in the 1-0 victory against Glenavon on Monday night.

However, speaking earlier that day, Kenny said he will take his time before making a decision on whether to sign the 33-year-old who he managed at Derry City.

“Paddy has been in for three sessions and could play a part against Glenavon but we will have to wait and see what happens there.”

One player who is on the verge of signing for the Lilywhites is Steven Kinsella. The 18-year-old Dubliner is due to arrive at Oriel Park on a season-long loan deal from Everton and Kenny feels he is bringing in an exciting prospect.

“Steven’s a left-footed winger who likes to play on the right so he will give us good options.

“He is a very talented player and was regarded as the most exciting of his age group when he was going to Everton.

“He was injured for quite some time over there and came back to Ireland for a spell last year with St Pat’s.

“He has a good football brain and will bring good quality.”

The chase for another winger, Celtic’s Michael Duffy, is also nearing completion with Dundalk still confident of signing the 22-year-old.

Despite reports in Scotland suggesting otherwise, the former Derry City star is still on loan with Dundee. He appeared as a substitute in their Scottish Cup defeat to St Mirren 10 days ago and was on the bench again for the 3-0 loss to Aberdeen on Friday.

And with the UK transfer window due to close at 11 pm this evening, Duffy will remain at Den’s Park until the end of the Scottish season - unless he is recalled by Celtic.

“I’m not sure how that will end up, to be honest,” said Kenny. “The club done their very best but the ball is in Celtic’s court now. The deadline is there so we’ll have to see how it goes.”

Kenny is hoping to have Duffy and Kinsella on board before Dundalk head to Salou in Spain for a five-day training camp on Wednesday.

The Lilywhites will meet Espanyol’s B team at their stadium in Barcelona on Thursday and are hoping to line up another match for next Monday.

The Dundalk boss also confirmed that the Malone Cup match with Drogheda United would not be played during pre-season but did not rule out the possibility of it being staged in the early part of the campaign.

Speaking last week, Drogheda manager Pete Mahon accused Dundalk ‘of a lack of respect’ regarding the scheduling of the game but Kenny said that those claims were ‘totally untrue’.