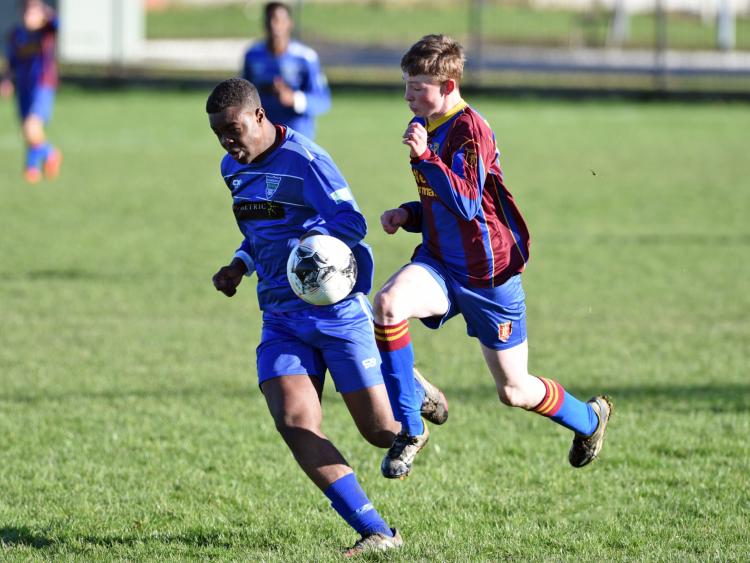 A goal from Colm Bracken, six minutes from time, was enough to give a relieved Redeemer side a share of the points with Glenmuir in this U17 League game in Gorman Park on Saturday afternoon.

After losing three players to the Monaghan Cavan FP League of Ireland U17 squad and unable to call upon any of the club’s U16 players who were unavailable due to an SFAI National Cup tie in Cobh, Glenmuir were regarded as underdogs going into the game.

However, despite those setbacks, the Glenmuir players looked in a determined mood and they took an early lead after just three minutes thanks to a superb finish from Melvin Onu after good work by Aaron Fee.

The early goal put the away side on the front foot and they surged forward after their positive start. Lone striker Liam McStravick - drafted in from the U15 team for the game - was a constant source of stress for Redeemer and he fired a low shot from the edge of the area but his goalbound effort was blocked by Sam Ayo.

Redeemer’s most exciting player, Kevin McCormack, almost equalised after 14 minutes when he swept past two defenders to fire in a shot but Glenmuir goalkeeper Daniel Mullen managed to push the ball away to safety.

Glenmuir looked to stretch their lead and they controlled possession with McStravick and Abdul Abubakar going close and they got their reward when Fee hammered home through a crowd of players on the half hour mark to make it 0-2.

While never out of the game, Redeemer second best for long spells as the understrength Glenmuir side looked comfortable but the home side thrown a lifeline one minute before the break with a harsh penalty decision and Kevin McCormack hammered home from 12 yards.

The late goal meant that the momentum swung in Redeemer’s favour and their confidence began to rise with McCormack causing havoc with his dribbling skills. In the 12th minute of the second his curling free-kick was tipped away by Mullen.

Glenmuir still had their moments and Melvin Onu went close with a fierce low drive that was well saved by Stephen Rylands at the expense of a corner.

At the other end, a Bracken free was tipped onto the crossbar by Mullen but the Glenmuir ‘keeper couldn’t prevent Bracken from scoring the equaliser when the Redeemer striker latched onto a Jack McKenna pass to turn his marker and find the bottom corner.

Glenmuir’s response was positive and they were denied a winner after a Cian O’Donoghue pass found Abdul Abubakar in space but he was denied by a point-blank Rylands save.