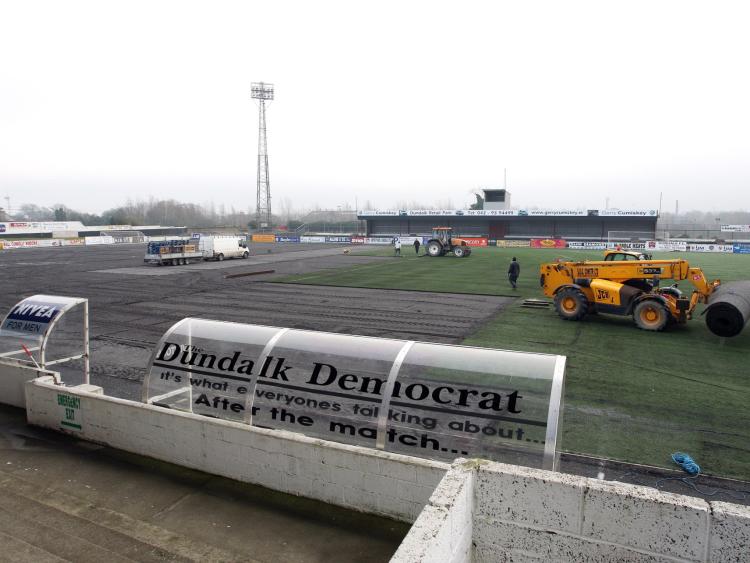 The Dundalk squad will head to Spain for a five-day training camp at the beginning of February while a new surface is installed at Oriel Park.

The club confirmed last week that a state of the art 4G pitch, provided by Italian company Limonta Sport, will be in place for the start of the new SSE Airtricity League season on February 24.

It means that all of Dundalk's pre-season matches - including The President's Cup fixture with Cork City - will be played away from home.

However, Lilywhites boss Stephen Kenny said that laying the new pitch now would enhance the club's chances of hosting their Champions League second qualifying round home leg in July.

“We had to make a decision whether to go with the pitch in the summer or go with it now,” Kenny told The Dundalk Democrat.

“It means pre-season will be disrupted but the trade-off is that we can possibly stage our first European game at Oriel Park.

“We wouldn't have been able to do that if we kept the surface that's there at the minute. If we carried out the work during the summer then it would have ruled out any testing that was needed to play the European game here.

“It gives us problems in pre-season but the flip side to that is it won't disrupt the season itself which is important.”

The existing surface at Oriel Park, which was installed in 2009, will be ripped up this week and Kenny - like most Dundalk supporters - will be glad to see it go.

“I’ve been here for four seasons and in the last year, it really deteriorated - if that is the right word. You needed it to rain because on a dry day it was very inconsistent.”

As a result, Dundalk will rotate their training sessions between the all weather facilities in Muirhevnamor and the grass pitch owned by the Dundalk Grammar School.

The League of Ireland champions scheduled to play their first pre-season game against Glenavon at Mourneview Park in Lurgan on Monday night before travelling to Spain next Wednesday (February 1) where they will play two friendlies during a five-day training camp. The opposition has yet to be confirmed.

“Because we have no base it gives us a chance to not only train but to get some matches in and integrate the new players,” said Kenny.

The Leinster Senior Cup tie with St Pat's CY - which will be held in Ringsend - is likely to be played when Dundalk return from Spain with February 9 earmarked. As a result, the Malone Cup fixture with Drogheda has been thrown into doubt.

The FAI have confirmed that The President's Cup with Cork City will be staged on Friday, February 17 at Turner's Cross. Kick-off is 7.45pm.

“With the new pitch, it means we had no choice but to concede home advantage for The President's Cup,” added Kenny.

The Dundalk boss is still hoping to bring in ‘two or three more’ more additions to improve his squad ahead of then.

Eight of last year’s title-winning squad have left the club while Ciaran O’Connor and Georgie Poynton have been sent out on loan.

Kenny has signed Sean Hoare, Niclas Vemmelund, Jamie McGrath and Conor Clifford and he said he was aiming to bring in more reinforcements in the coming weeks.

“It has never been our policy to carry a big squad but we took Alan Keane and Dean Shiels in during the season and it means we have eight players now who have left the squad and a further two gone on loan.

“We’re still hoping to bring in another two or three and it’s important that the balance of the squad is right and that the quality of players is right.”

One player who Kenny is close to bringing to the club is Everton’s teenage winger, Steven Kinsella.

The 18-year-old Dubliner moved to Goodison Park from Templeogue United in 2014 and has represented his country at U15 and U17 level.

He spent time on loan at St Patrick’s Athletic last season, making 10 appearances. One of those came in the 5-2 win over Dundalk at Richmond Park in October.