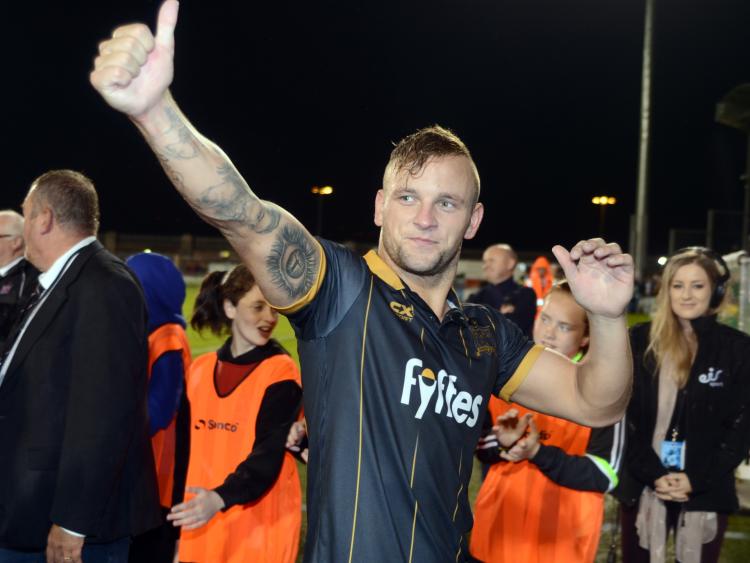 Paddy Barrett has inherited Andy Boyle’s number four shirt and he is also hoping to fill the void left by his former teammate and become Dundalk’s number one central defender.

The Waterford man played 32 times in all competitions last year, appearing in all six of Dundalk’s Champions League games where he played a starring role in the games against BATE Borisov in Tallaght and Legia Warsaw in Poland.

He signed a new contract with the Lilywhites prior to Boyle’s switch to Preston North End and, speaking to The Dundalk Democrat, he believes he has what it takes to step into the Dubliner’s shoes.

“I don’t want to be the second choice,” said Barrett. “It’s a short career and you want to be playing every week. Boyler’s boots are big ones to fill. He was brilliant last year and hopefully, I can do the same this season.

“I knew that he might be leaving before Christmas and that was a bit of a factor in me staying here,” he continued. “There was interest from other clubs and I had a few choices but I’m very happy here.

“We had such a successful season last year and it’s hard to walk away from that. I played in a lot of big games and I feel as though I made a big contribution and this year I want to do the same.”

Barrett is expecting some fierce competition to secure a place in Stephen Kenny’s starting XI. Himself, Brian Gartland, Niclas Vemmelund and Sean Hoare will all be competing for just two positions but it is a challenge he is looking forward to.

“The two defenders that Stephen has brought in are top class. Everybody knows what Sean Hoare can do. He showed that at Pat’s and it’s the same with Vemmelund. He can play anywhere across the back four and will be a great addition.

“There will be four of us fighting it out but it’s good to have competition and to have people keeping you on your toes. I’ll relish the chance to prove myself and try and get in ahead of them.”

Many people outside of Dundalk feel that four-in-a-row might be a step too far for Kenny’s squad. Eight of last year’s squad have departed but Barrett feels there is more than enough quality in the ranks to repeat the exploits of last season.

“It’s a lot to lose but we’ve kept some big players, the likes of Stephen O’Donnell and Brian Gartland, who are big characters in the dressing room.

“They will help the new lads coming in and I’m sure they’ll gel in quickly. We’re a tight group and it won’t take them long to fit in.”

Barrett will also be there to lend advice. He may only be 23 but with two full seasons - and a host of winners medals - under his belt at Dundalk, the former Galway United star can now be regarded as one of the ‘experienced heads’ in the changing room.

“I’d hope that any of the new players - young or old - look up to me. I am young but I’ve been here three years now and I feel like I’ve got a good head on my shoulders.

“If somebody needs to speak to me then I’m happy to do it. I want to be one of the players that can help others out.”

One voice that Barrett will miss is Alan Keane’s. Now at Crusaders, the full-back lived in the same house as the group of players -  Barrett, Stephen O’Donnell, Robbie Benson and John Mountney - known as ‘the locals’ during his six-month stint at Dundalk last season. Another two of the departed, Daryl Horgan and Shane Grimes, were also close at hand.

“As we all know, Alan came out of retirement and showed what a top player he is. He still has plenty to offer and I wish him all the best up north. He was great to have around the house and had plenty of experience.

“Daryl lived with us before he moved out but he only moved to the back of us so he was always around and was a big part of the group ,” he continued.

“He is a great character and if he doesn’t return he will be terribly missed. His injury was very unfortunate but hopefully, he can get fit and come back.”

Keane’s departure leaves a vacancy in Belfry Drive. Barrett, however, said that anybody interested in taking it should beware of what they’re getting themselves into!

“There’s a room there. It won’t come cheap though and if someone wants it they’d better be prepared - and I hope they can cook”, he laughed.

Barrett’s good humour continued when we spoke about the infamous artificial pitch at Oriel Park which will be replaced by a new, top of the range 4G surface.

Barrett, like many others, won’t shed a tear when it’s removed.

“You can see the disgust on my face,” he laughed. “No, I don’t like it one bit and I’ll be glad to see it to be honest.

“I think we’d all like to play on grass but that can’t be done at this moment in time so the best 4G pitch that you can get is all you can ask for.

“Hopefully we can produce an even better style of football on it because the pitch here can affect the way we play. Sometimes it , sometimes it doesn’t, it’s very hard to adjust to.”

The surface is due to be lifted this week and Barrett said he was willing to lend a hand if needs !

“I can’t wait to see the back of it. If they want me to get rid of it myself, I’ll do it no bother!”