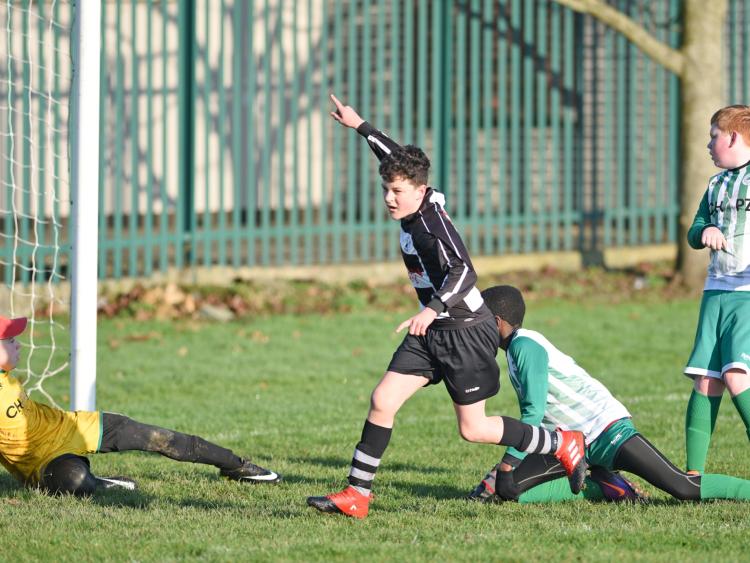 Quay Olympic stretched their lead at the top of the U13 Division One table with this emphatic victory over their nearest title rivals, Shamrocks in Fatima on Saturday morning.

The started at a quick pace with both teams showing their intent to score the opening goal by getting the ball down and passing it on the good playing surface in Fatima which recovered well from the overnight frost.

Ben Gorman brought out the best in Quay Olympic goalkeeper Aaron McGuinness after 19 minutes, the netminder producing a timely block after a superb pass from Mark McArdle sliced open the Quay defence.

Shamrocks tried to respond with a Mark McArdle effort but McGuinness saved with his feet. It was shaping up to be the game that everybody in attendance hoped it would be but Quay Olympic put the result to bed with three goals in the space of three minutes.

On 24 minutes a defensive error gifted the ball to James O’Connor and he fired low the net from a tight angle before Killian Staunton and O’Connor added two more goals to complete a torrid three-minute spell for the home side.

That was how it stood at the break but Shamrocks refused to lie down and just before the hour mark they pulled one back when Mark McArdle won a ball out left and drifted by a few defenders before finding the net from 15 yards.

Quay upped the pace of the game again and unlucky not to restore their four-goal advantage when substitute Jason Breen drove narrowly wide and the same Quay player was bravely denied by sub keeper Sean Brown moments later.