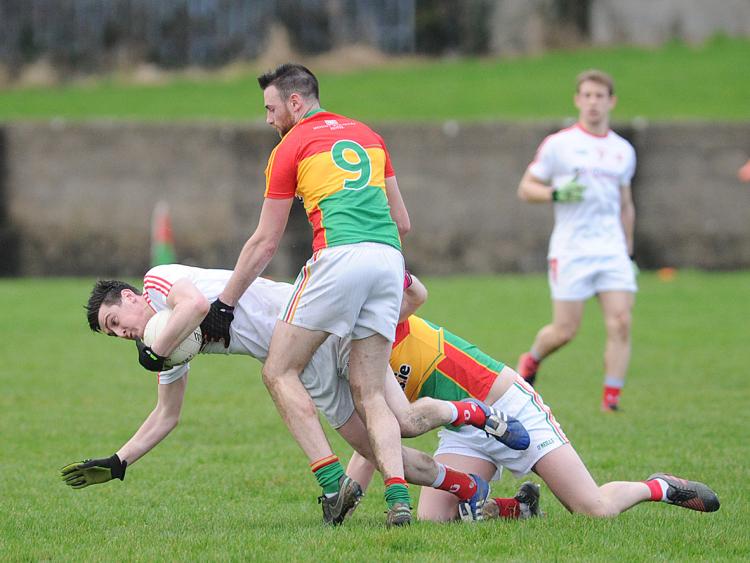 Louth's Tommy Durnin holds on to this ball against Carlow on Sunday.

The first-ever, and possibly only, Leinster senior football championship to be played at St Brigid's Park, involved Louth and Carlow. It took place in 1973, and by winning, the then-Jimmy Mulroy-coached home team qualified to play Dublin in the quarter-finals.

This match was referred to here a few weeks ago; by winning it – on a replay – Louth opened a gap that has yet to be closed. On no occasion since then has there been a Louth win over the Dubs in the senior knock-out.

Too much to expect a change of fortunes this year, but there are other less ambitious targets to be aimed at. One is the O'Byrne Cup.

This year's renewal of the pre-season tournament, which is of more importance to the teams hoping to find a way out of the wilderness than the outfit that has assigned them to there, is at the semi-final stage. Having strung three winning performance together in the preliminaries, Louth still standing.

A productive eight days began with an away win over Westmeath. After that, Maynooth’s college team was taken care of, and in what proved itself the most difficult of the three obstacles, a gritty Carlow team was shaded close to the finish-line.

Sunday's game was at St Brigid's Park, this meeting of the quite possibly being the first of the counties at the venue since that championship tie of 44 years ago. Good that a head of steam has been worked up, but even better is the prospect of a searching test in Sunday's semi-final – with the possibility of another – prior to the start of the league at the beginning of next month.

Meath, under a new management team, , like Louth and all other counties in Leinster, trying to find a slot in the space occupied by Dublin. They're a division above Louth in the league and know that if they are to be serious challengers for championship honours, they must have a good spring. It would help their cause if they were to win this Boyneside clash, going ahead at Pairc Tailteann.

We should have an idea of how Louth are going to line out in the league opener with Laois at O'Moore Park on the first Saturday in February by the shape of Sunday's selection. A lot of experimenting went on in the three games to date, but it's now time to find a settled 15.

A feature of Sunday's performance was the team's willingness to battle to the finish, and their ability to overcome the handicap of playing with 14 for nearly of the match.

Carlow, who played the better football over the 77 minutes and were more adept at taking a score from distance, looked winners when they went a couple of points clear near the end of regulation time. But Louth, taking advantage of the five extra minutes added by the referee for a reason only he knew about, and, also, a mistake by the Carlow 'keeper, persisted.

Anthony Williams got the vital score to restore the lead his side had held for so long throughout and Gerard McSorley added another three-pointer, making it 3-14 to 2-12 at the finish.

It should be better on Sunday – it will have to be if the result of the ' meeting at the same stage of the competition is to be reversed.