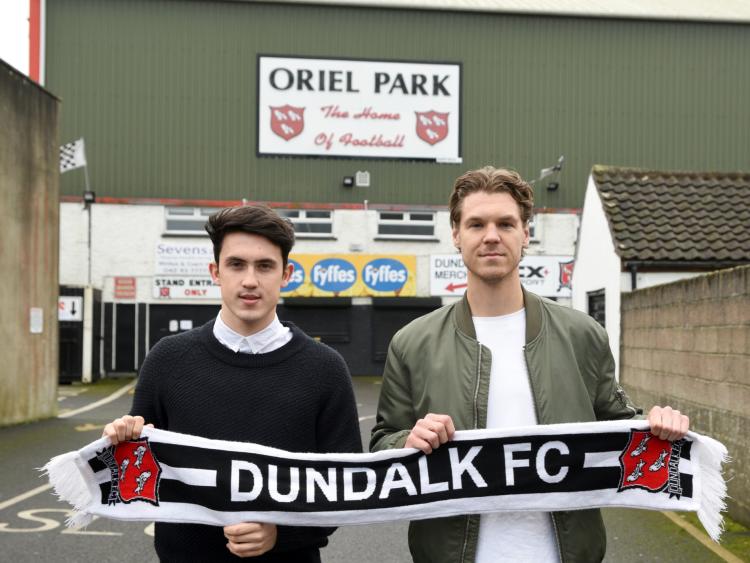 Dundalk FC delighted to announce the signings of Jamie McGrath and Niclas Vemmelund.

Athboy native has signed from St. Patrick’s Athletic where he has featured in the first team since 2014 and picked up two EA Sports Cups in the past two seasons.  He lined out 66 appearances with the Saints and scored 9 goals.

The 20-year-old, who can play in midfield or as a striker, has lined out for the Ireland U19’S and is currently studying at NUI Maynooth.

“I am delighted to get the deal done. Good to get it over the line now and I can focus on getting started with the club. Pre-season starts tomorrow and it’s something I am looking forward to now.

“Dundalk have been the biggest club in the country over the last while so it’s a good place to come and I can’t wait to get started with the team.”

One of the deciding factors for McGrath was the European matches and he is looking forward to being involved this year.

“Europe was obviously a highlight for the club last year and everyone watched on – I was at a few games myself! I was looking on and it’s something I want to be part of. Europe is where everyone wants to play and Dundalk showed last year that Irish sides can compete at that level.

“I am looking forward to being part of that this year and everything else. It’s exciting times. ”

Having played against the Lilywhites in the past few seasons, the Ireland underage international has been impressed with a number of attributes of the side and said it was too hard to turn down Stephen Kenny when he came looking.

“The speed of play, everything is much quicker than other teams in the league, the fitness level and the technical ability is second to none within the team. I want to win everything while I am here. I want to do as much as I can.

“I was delighted when Stephen (Kenny) gave me the call. I knew that I would fit in well here and I am happy to be a part of his plans. The club going in the right direction and I couldn’t say no.”

Vemmelund moves south from Derry City where he spent the 2016 season and was a key member of the Candystripes side which had a superb season finishing third in the SSE Airtricity League where he featured in 41 games across the campaign.

Hailing from Denmark, the has lined out for a number of clubs across Europe including Danish outfits FC Fyn, Odense and BK Marienlyst, Swedish side IF Brommapojkarna and Icelandic Premier League team Stjarnan.

Also speaking to dundalkfc.com  Vemmelund expressed his happiness at signing for the champions and has already set his sights on winning trophies with the Lilywhites.

“I feel happy to have signed for Dundalk. I feel good and ready to go. Dundalk been the best club in Ireland the last few years and I wanted to join that. I am happy to be here.

“I enjoyed my time in Ireland last year. It was a good start to life in the league but I want this year to be a better year for me. I want to improve and win some trophies. Dundalk been very successful and I want to win.

The defender watched on as the club had success in the Champions League and Europa League and admitted that he was impressed with what he saw.

“Everyone was impressed with the European games last year. Dundalk brilliant in Europe and they got some great results. It was good for the league and good for the other teams here. It showed that it was possible to go through and have success.

“I want to do the same this year. I want to have some good success in Europe and play in the big European games.”

Having played in Europe before, Vemmelund is looking forward to returning to action in continental games and hopes his experience can aid the Lilywhites this season.

“I have played in European competition before and they are very special matches. Playing European football is a special time in a player’s career and it is the highest level. Those matches have special atmospheres and I hope my experience can help.

“I have experienced that before at other clubs but not in Ireland yet. That is why I came to Dundalk. I want to experience European football here and we can do the same as last year. ”