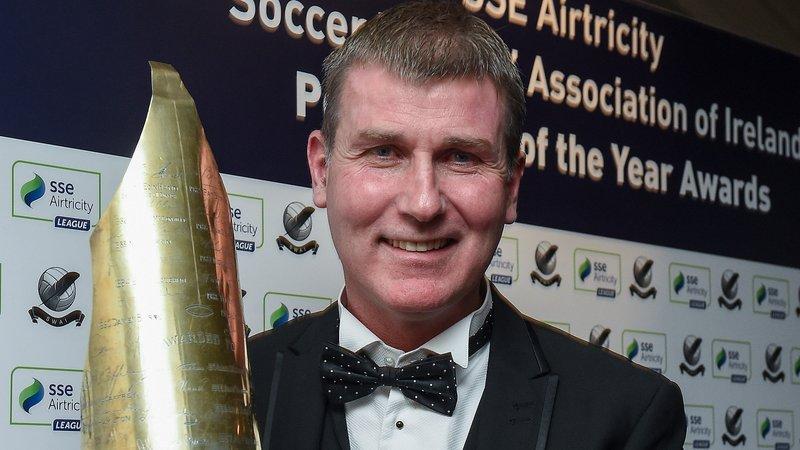 Dundalk manager Stephen Kenny was tonight revealed as the winner of the SSE Airtricity/Soccer Writers' Association of Ireland Personality of the Year award.

Kenny, 45, enjoyed a remarkable season in charge of the Lilywhites. The Dubliner led the County Louth club to their third title in a row and to the group stages of the Europa League. Kenny’s side also made it to the FAI Cup final but were beaten 1-0 in extra-time by Cork City.

The Dundalk boss headed a six-man shortlist for the Personality award and the winner was announced at Dublin's Conrad Hotel tonight, in front of Republic of Ireland manager Martin O'Neill and his Assistant, Roy Keane.

It is the second time Kenny has won the award after he also collected the gong in 2014.

Meanwhile, Cork City’s Mark McNulty picked up the Goalkeeper of the Year award at the banquet.

The 2014 winner had an impressive season as Caulfield’s side finished runners-up in the league and won the FAI Cup by beating Dundalk.

McNulty, 36, recorded 25 clean sheets on the season, with 21 of those in the league as he conceded just 23 goals.

The Slovakian nonagenarian has had a long association with the League of Ireland, first through Shamrock Rovers, where he was a director, and UCD, where he has been Executive Life President since 1987.

Veselsky was born before World War One was over and served in World War Two as a partisan in the Tartra Mountains, fighting for his homeland against the German advance.

Joe settled in Dublin in the late 1940s and became established as a leading figure in table tennis, captaining the Irish team for many years and is a long serving Life President of the Irish Table Tennis Association.

A jeweller by profession, for many years, Joe provided an engraved watch to the winner of the Personality of the Year award.

Robbie Keane received a special presentation from Irish manager Martin O'Neill on behalf of the SWAI in recognition of his outstanding service to Irish football.

Keane, 36, retired last August after scoring his 68th international goal in his 146th appearance - both records are almost certain to stand the test of time.

Keane later made a presentation on behalf of the SWAI to Brendan Bradley, the all-time League of Ireland goalscorer with 235 goals. It was the first time the leading international and leading league goalscorers were pictured together.