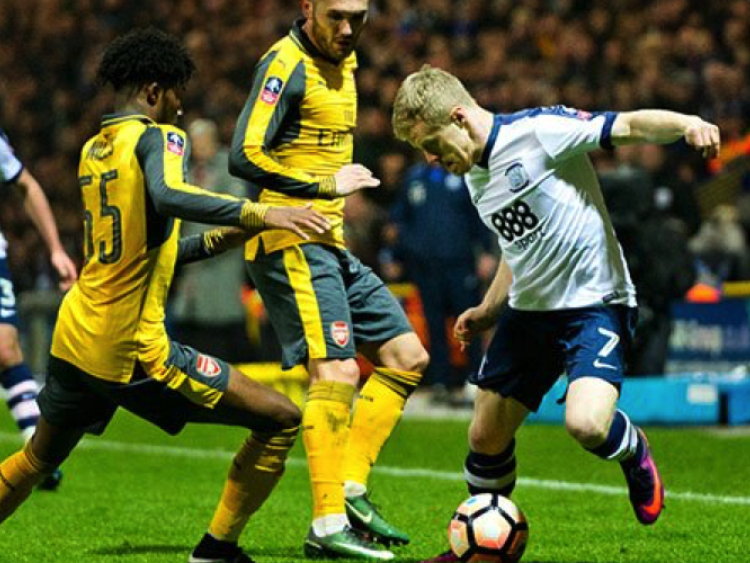 Daryl Horgan made his debut for Preston against Arsenal last week. Picture: PNEFC

Horgan - wearing the number seven shirt - made his debut for Preston in last Saturday’s 2-1 defeat against Arsenal in the FA Cup and looked pretty assured during his 10-minute cameo.

Boyle has yet to feature since making the switch from Dundalk but Grayson said that the 25-year-old would get a chance to show what he could do and backed both players to make a big impression at Deepdale.

"Daryl was involved in the squad at the weekend,” Grayson told RTE 2FM’s Game On during the week. “Andy hasn’t been yet but sometimes it’s easier to incorporate an attacking player into your squad than a defender.

"Defenders get punished very quickly if you’re not careful and Andy’s still learning how we work as a back three and as a back five.

"As an attacking player there isn’t as much emphasis on when you make a mistake but I certainly see both players playing a big part in this football club, hence why they’re here."

Horgan and Boyle were instrumental in Dundalk’s European run last year and Grayson said their ability to play at the highest level would only benefit Preston.

"Sometimes it’s a big of a risk when you’re taking players from the League of Ireland to the Championship because there is a bit of a gulf but these guys have done it in the Europa League, in the Champions League when they’ve played against top opposition.

"We didn’t feel it was a risk at all to sign these players. We’re delighted to have got them and the biggest thing for me was their enthusiasm and desire to keep improving.

"When I got a chance to meet them I was really impressed by their attitude and their hunger to succeed and ultimately we had to fight off quite a bit of competition for both players.

"The one thing I could do with both players is work with them and give them an opportunity in the Championship and see where their career goes from there."

Boyle and Horgan are both in Preston’s squad for their clash with Championship leaders Brighton and Hove Albion at Deepdale on Saturday where they could line up against their former teammate, Richie Towell, who played 90 minutes for The Seagulls in last week’s FA Cup win over MK Dons.