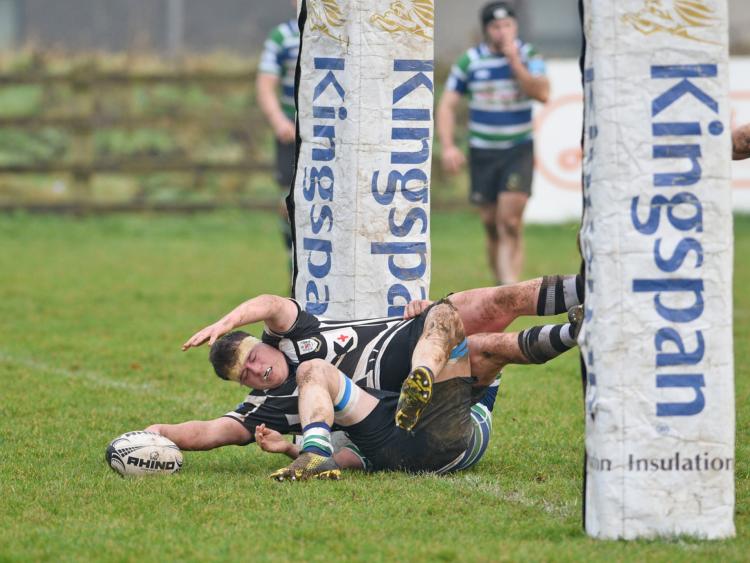 Dundalk RFC’s Sean Arrowsmith goes over for a first half try only for it to be called back by referee Stephen Troy for an earlier infringement. Picture: Ciaran Culligan

Dundalk RFC’s first outing of 2017 ended in defeat as Gorey left the Mill Road with a 24-17 win on Saturday afternoon.

Both sides looked to be a bit timid in the rucks during the opening stages due to the new head contact rule but the players slowly overcame that as the game wore on.

Dundalk were once again the dominant team around defence and counter attack but the hosts conceded the first penalty of the day, allowing Gorey to take the lead.

This didn't stop Dundalk’s attacking style and they kept applying the pressure with some great hard running lines by the forwards. This allowed Michael Walls and Derek Williams to provide some quick ball to their backs.

Dundalk looked to be gaining ground and when they found themselves on the Gorey line an inside pass from Walls to Stewart was blocked by the referee. McDonald converted the subsequent penalty to level the scores.

The Mill Road men took the lead shortly after, Moving up the pitch, Stewart found himself in the same position but this time he was able to cross the line.

The visitors, however, hit back with two tries before the break, - both the result of interceptions on halfway - to take a 17-10 lead into the break.

Things got worse for Dundalk as Gorey extended their lead to 24-10 early in the second-half and although their indiscipline saw the Wexford outfit pick up two yellow cards, Dundalk just couldn’t capitalise.

They did pull a try back with 30 seconds remaining when Jonathan Williams touched down under the posts. McDonald converted but it proved to be too little, too late although the bonus point was enough to move Dundalk into joint third place with De La Salle Palmerstown.

Next up for Dundalk is a trip to table toppers Malahide on Saturday at 2.30pm.