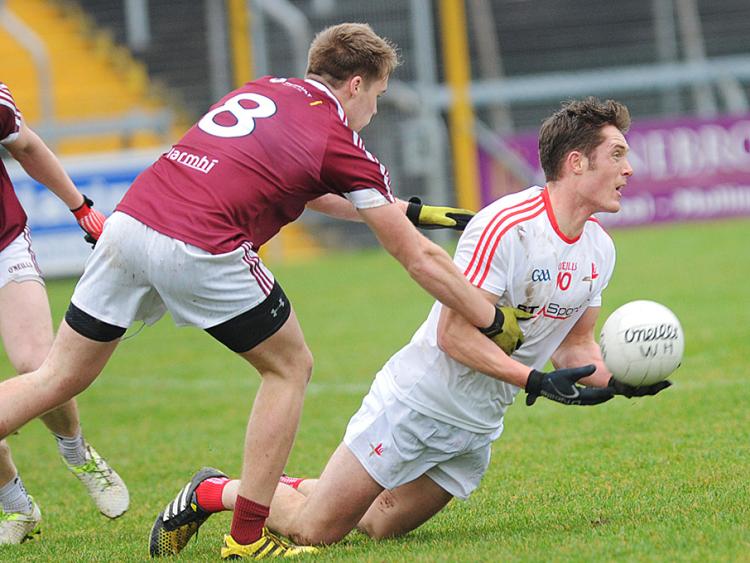 Every year the O’Byrne cup grants hope to all involved. There is an enthusiasm like no other when it comes to the opening competitive game of the season.

On Sunday, Louth supporters departed Cusack Park in Mullingar with an even stronger air of optimism after a wholly committed performance by Colin Kelly’s side.

The opening exchanges were tense with both defences on top. Westmeath’s talisman John Heslin got the scoreboard ticking with a free.

On the 10 minute mark, referee David Hickey provided the with an opportunity to raise their voices with two contentious black cards.

Sean O’Mahony’s midfielder Conor Martin stood his ground in front of the onrushing James Dolan after he hand passed the ball, only for Dolan to pull Martin to the ground. Dubious indeed.

A slick move saw Pepe Smith level the game after Craig Lynch pulled off a superb save to deny Shane Dempsey.

Louth, at this stage, were under increasing pressure, the lively Dempsey scored and another Heslin free gave the Midlanders a two-point lead while they had a Kieran Martin goal disallowed in this period too.

Lacking penetration in the final third was the problem for Louth in the opening half but Tommy Durnin scored from a rare Louth attack to make to 0-3 to 0-2.

Kieran Martin countered to devastating effect after another Louth attack broke down.

Substitute James Califf pointed a free before his marker Paddy Holloway scored Westmeath’s last point of the half.

Having weathered the storm, Louth finished the half strongly, starting with a Padraig Rath point off his weaker left foot and forced error on the Westmeath short kick out Ronan Holcroft obliged.

The strength of Louth’s first half finish was summed up in Anthony Williams lung-busting drive up the field, he hand passed the ball across the goal although Conall McKeever’s pawed effort was saved, Derek Crilly on his comeback put the ball into the net eventually, after his first attempt was denied.

Heslin again got proceedings underway in the second-half with a free but three points in a row for Louth pushed the game beyond their opponents reach.

Holcroft converted a free before Crilly hit a fine point after a one-two with McKeever and Califf added to his tally after Williams palmed the ball on to the crossbar with the open goal at his mercy. 1-8 to 0-6 in the Wee County’s favour.

John Heslin, with a free, and Callum McCormack did find the range to leave a goal between the sides, however, the lack of a real fightback from the home side combined with some stout Louth defending meant the game fell into a lull.

Substitute Alex Gardiner helped himself to a brace either side of a Heslin free to leave a flattering look on the final score.

The cohesive display gives Louth - with two home games this week - a great opportunity to top the group and advance to the O’Byrne Cup semi-final.

Historically, the game may not be one for the ages but it did see the introduction of the new mark rule and the record books will show Bevan Duffy was the first Louth player to win a mark.