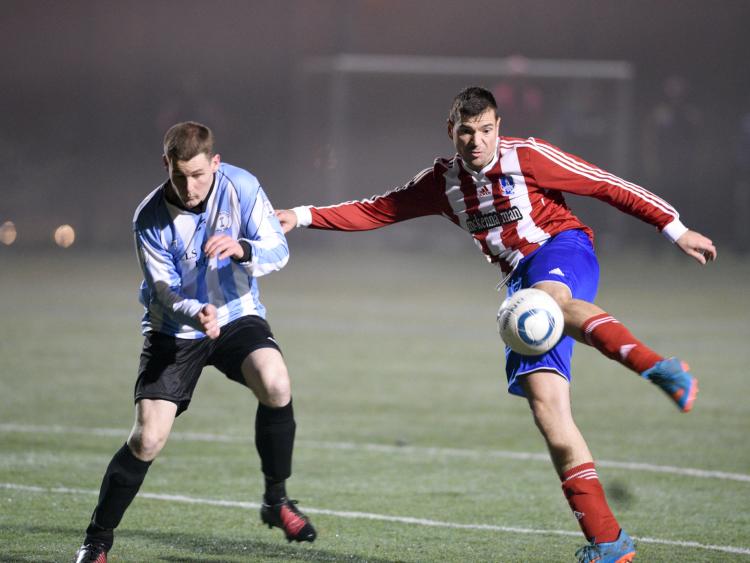 Bay FC missed out on the chance to close the gap on NEFL Division Three leaders Virginia Celtic to just three points after they fell to their first home league defeat of the season against Kells Celtic on Friday night.

The hosts started well and created a number of opportunities with Anton Webb combining well with Mark Larkin to craft the opener, a fine strike from the edge of the area by larkin that looked like it might put Bay on their way.

Kells, however, had other ideas and were level 10 minutes later when Bay failed to deal with a corner at the near post and the ball was squeezed home.

Moments later, Kells made it 2-1 when a punt into the box wasn’t dealt with by the Bay defence and the visitors’ nimble striker took full opportunity of the hesitation to make it 2-1.

The Kells striker proved to be a handful for Bay all night and it was him who grabbed the third, breaking the offside trap to slot past Kevin Mullen with confidence after just 15 minutes.

Bay were left shellshocked but they were handed a chance to get back into the game on the 20 minute mark when winger Kevin Scollon was hauled down in the box and Webb made no mistake from the penalty spot.

The game’s turning point arrived on the half hour mark when the Kells striker rounded Mullen and went to slot the ball home from a tight angle.

Bay defender Paddy Kehoe intercepted the ball, right at the post, but was adjudged to have handled it, resulting in a Kels penalty. To add insult to injury, Kehoe was also dismissed; a very harsh red card.

Kells put the penalty away and with Bay in disarray, they added two more before the break to leave it 6-2 at the interval.

The second-half was a game of few chances but Bay pulled one back when Mark Larkin’s quick thinking from a free-kick saw him beat the Kells goalkeeper as he was setting up his wall.

The visitors, though, matched Damien Bellew’s side, grabbing another from an audacious lob from 30 yards before Webb cut the deficit once more with a fine solo effort after turning the Kells defence inside out in their own 18-yard box before unleashing a shot into the top corner.

It was the visitors who had the final say, Mullen beaten for an eighth time in the dying seconds to round off a miserable night for Bay going into the Christmas break.