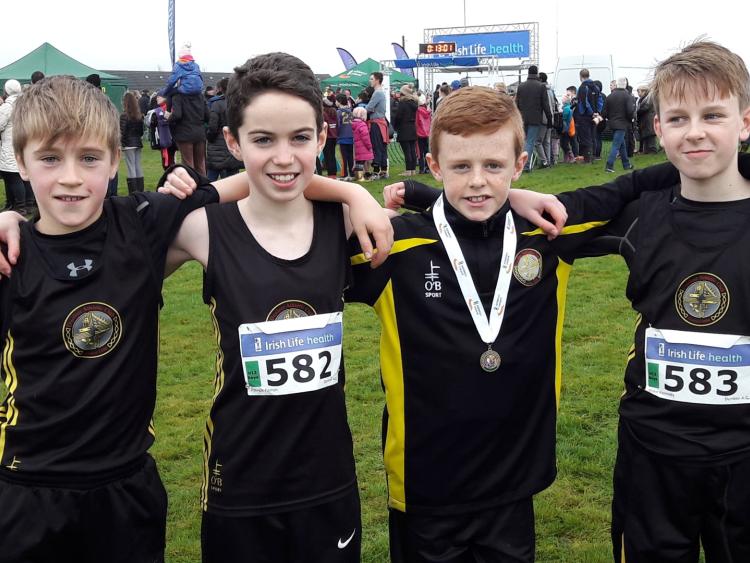 There was plenty of excitement at the Irish Life Health National Novice and Uneven Age Cross Country Championships in Dundalk IT on Sunday last.

An average of 150-160 athletes took place in each age group and the venue couldn't have asked for a better start than the girls U11 1.5 km race, with Co Louth and Dunleer AC athlete Erinn Leavy storming home to victory with a confident display and a clever tactical race.

Erinn showed great maturity in biding her time, tracking the race leader and eventually powering home to a remarkable victory. Erinn is the current Louth, Leinster and now national champion.

Coaches Kevin Matthews and Fintan Reilly were quick to congratulate her on her fantastic achievement with Kevin remarking that it was an early Christmas present for the club.

There was further joy for Dunleer AC when Tiernán Rowley led his dedicated teammates to team bronze in the boys U13 2.5km. Tiernán is an amazingly determined young athlete who showed his mettle on Sunday, battling hard every step of the way and running his socks and spikes off to finish in the top 12, winning himself an individual medal.

He led his team to third place in a very competitive age group, ably backed by James Russell, Patrick Farrell and Blake Kennedy. This group of boys have trained hard all winter picking up Louth, Leinster and now national team medals.

In the penultimate race of the day, the National Novice Ladies 4km, it was Karen Costello who led her Dunleer AC team home. Karen was 12th home in a field of 140 athletes with a 15.17 4km cross country to cap off a fantastic season, a season of Louth titles and Leinster and national top 12 placings. Nicola Welsh continued her run back into form after injury with a 34th placing and a time of 15.58.

It was a great day for Dunleer AC and the support was magnificent with the club’s senior and masters athletes officiating to ensure a great day of cross country running for everyone.

Training will recommence in January as the Dunleer AC athletes prepare for Rás na hÉireann on February 5 2017 and for the indoor season.