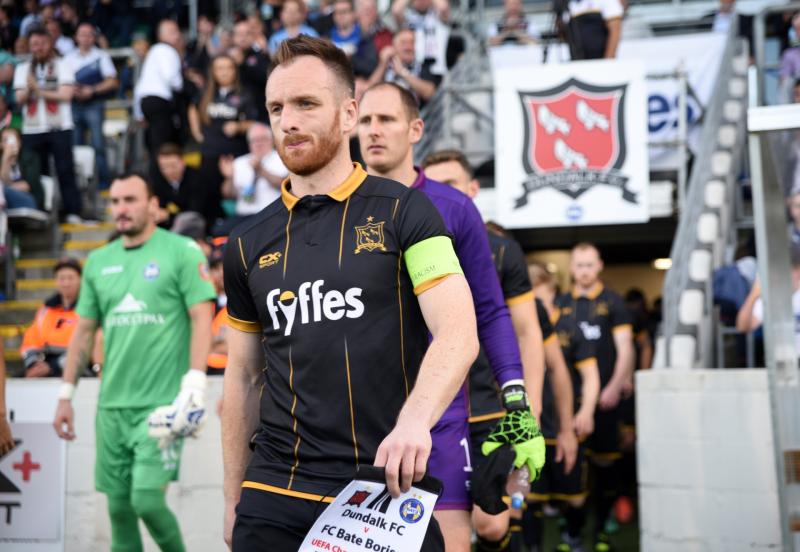 Like many in Oriel Park, O’Donnell, who returned to the side after missing the FAI Cup win over Derry City through suspension, watched on in disbelief as a Gary Rogers mistake ended with Sligo Rovers taking an early lead through Achilles Campion.

And although Dundalk controlled the majority of the first-half, they were hit with a sucker punch when Phil Roberts made it 2-0 before the break.

“Obviously it’s a terrible result for us,” said O’Donnell. “I thought we actually played well in the first half and we created chances but it was one of those nights where things went straight at the goalkeeper or just wide.

“On another day we could have scored four in the first-half alone but two terrible moments cost us, a minute into the game and then when they scored the second goal before .“

Dundalk thrown a lifeline when referee Ben Doherty gave Sligo winger, Liam Martin, his marching orders with 34 minutes to go but it was the visitors, and not Dundalk, who rallied with Raffaele Cretaro putting the seal on a result that sent shockwaves around the League of Ireland.

“ down against ten men, we still fancied our chances of getting back into the game but the goal we conceded in the second half was very disappointing. That was game over but we still should have been able to do a hell of a lot more even after Cretaro scored,” was O’Donnell’s assessment.

“When teams come here and you give them something to cling onto then it can give them a big bounce in their step. But that was in the first minute and we still had 90 odd minutes to get back into it and we didn’t. We win as a team and we lose as a team. We weren’t good enough all over the park. Simple as.”

Dundalk won’t have much time to ponder the result. Next up is the clash of the top two when Cork City arrive at Oriel Park for what should be an epic encounter this evening.

The Leesiders are just a point behind his side but O’Donnell dismissed any suggestions that the pendulum might be swinging their way and pointed to 2014 as evidence of Dundalk’s ability to come up trumps when the chips were down.

“We’re still a point ahead,” he said. “They’ll be coming here with a bit of momentum after winning 5-0 in Galway but it’s about the 90 minutes on Tuesday and we’ll be ready.

“We were in a similar position a couple of years ago. We lost out on top spot going into the last game of the season against Cork and we won it.

“It’s a huge game,” he continued, “and there’ll be no need to get motivated for it. We just have to dust ourselves down and get ready for it.

“It’s two good teams going at each other. We’ve been playing well. Tonight is a setback but it certainly won’t dent any confidence going into Tuesday night’s game.

“It’s not all plain sailing in football and we have to get on with it. six games left and I’m sure there’ll be plenty of twists and turns but first thing’s first and that’s Cork.

“We’ve been there and we’ve done it. It’s up to us now to raise it on Tuesday.  We’ve big, experienced players who have stepped up to the plate and we’ll need everybody to do that.

“We’re hoping that it’ll be a brilliant atmosphere and the fans come out and hopefully Oriel Park is hopping. It’s going to be a great occasion and these are the type of games you want to be involved in.”